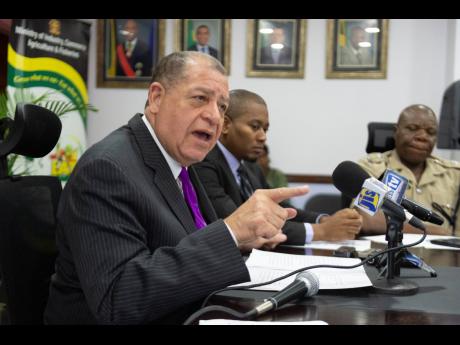 Gladstone Taylor
Minister of Industry, Commerce, Agriculture and Fisheries Audley Shaw provides an update to journalists yesterday on the conch industry and fisheries sector. To his left is State Minister Floyd Green.

Minister of Industry, Commerce, Agriculture and Fisheries Audley Shaw yesterday served notice that Jamaica will be taking a tough stance against regional poachers at the Caribbean Regional Fisheries Mechanism Council of Ministers meeting in St Kitts on May 3.

“I’m going to be sitting down face to face with the ministers from those countries where the poachers are primarily from and I’m going to be saying to them, ‘Dominican Republic, Honduras, Nicaragua, please keep your fisherfolk away from Jamaican waters’,” Shaw declared during a media briefing on conch fishery, at his Hope Gardens office.

He explained the rationale for targeting criminals from these countries.

“Our records show that … from January 2011 to March 2019, 10 foreign fishing vessels were caught fishing illegally in our waters. Of the 10 vessels, four were from the Dominican Republic, three from Honduras, two from Nicaragua and one from Venezuela.

“These vessels had a total of 103,673 pounds of different species of fishery resources with an estimated value of US$807,617. The species of fish included queen conch, spiny lobsters, sea cucumbers, sharks, crabs, octopus and finfish,” he advised journalists.

This will be just one aspect of a comprehensive strategy of advocacy and diplomacy the Jamaican Government will be pursuing to strengthen regional cooperation to prevent, deter and eliminate illegal, unreported and unregulated (IUU) fishing. This will dovetail with existing mechanisms to curtail the trade of illegally caught fish and fish products, according to Shaw.

However, on the issue of the sale and entry of these products into legitimate American and Canadian markets, Jamaica will deal with the matter at the bilateral level, the commerce minister explained.

“We will lobby for the redoubling of efforts for the collaboration and cooperation from fish- and fish product-importing states such as the United States and Canada. Unfortunately, fish and fish products originating from Jamaica but caught illegally by Jamaicans and/or foreign poachers find their way in these markets without the proper checks and balances.

“Increased collaboration and cooperation with the importing states can significantly reduce the level of IUU products from Jamaica entering these markets,” he noted, pointed to success in this area.

“Indeed, this approach has borne fruit in the case of sea cucumbers, where illegal imports from Jamaica to the United States have ceased because of cooperation between our Fisheries Division and the United States authorities. Similar types of arrangements will now be established with other importing countries for all fish and fish products.”