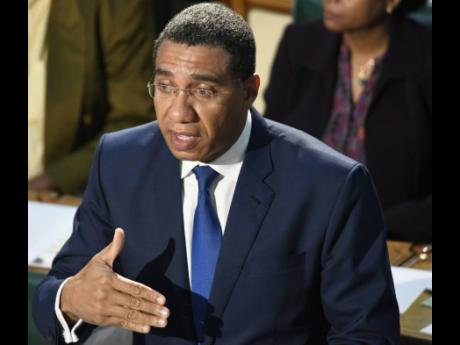 In the letter, dated March 13, 2019, Parchment Brown said that she visited the constituency on Friday, March 8, 2019, and made observations, received complaints and information on matters that she was sure had not been brought to Holness’ attention.

Parchment Brown urged that breaches and egregious conduct receive urgent and firm attention from the “chief custodian of Jamaica’s good governance, rule of law, standards, and laws of politics”.

Among breaches outlined in Parchment Brown’s letter are that a campaign billboard for Ann Marie Vaz, the Jamaica Labour Party’s (JLP) proposed candidate for the Portland East by-election, is located in Portland Western. Parchment Brown recommended that the billboard be removed before Nomination Day this Friday.

Reports reaching her indicate that a playing field upgrading project authorised on October 30, 2018, during Bloomfield’s tenure, has been taken over and partly financed by the JLP prospective candidate. Persons who were involved in the project have been reportedly removed and new individuals introduced to conduct works originally being done by a state agency. Parchement Brown has recommended that works at the location cease immediately and that representatives from the JLP “desist from entering upon or in any way carrying out activities on the site”.

Also outlined in the letter is that roadworks, including shingling, marling, and the filling of potholes, drain cleaning and bushing, are being done for and by the JLP prospective candidate in Pleasant Hill, Windsor Forrest, Fairy Hill, Manchiioneal, Barracks, and Way Bridge.

To support that point, Parchment Brown alluded to a report in The Gleaner on March 12, 2019, of JLP Chairman Robert Montague attributing works at Sea View Farm Road and the bridge at Bryan’s Bay to Ann Marie Vaz. Again, Parchment Brown recommended that all works outlined should cease immediately.

“The prospective candidate and the JLP may not have requested or received approval for work to be done on government installations. It is unclear whether these works are being supervised by any state agency or under any contract to protect the owners from future liability for harm or defects. Supervision by a state agency in these circumstances would be inappropriate,” the letter read.

Parchment Brown believes that some of the works in Portland Eastern are being done at the request of Daryl Vaz, minister without portfolio in the Ministry of Economic Growth and Job Creation, for the benefit of Ann Marie Vaz’s campaign. She said that persons who have contracts with the Government of Jamaica have been asked to provide materials, equipment, and personnel for roadworks without being provided any permits or contracts through any tender process. Such works, she asserted, should cease.

Parchment Brown was also concerned that shirts bearing the image of Daryl Vaz are being displayed on the streets of Portland East and West, which she recommended be removed immediately, “as the honourable minister is not on a campaign”.

The political obudsman confirmed that she had sent the letter to the prime minister and copied a number of individuals. She stated that no letter was sent to the leader of the opposition regarding any breaches committed by the People’s National Party.

“I am concerned about some of the projects being done,” Parchment Brown told The Gleaner yesterday.