‘No more guessing’ - ‘Butch’ hits out at culture of mediocrity; slams uncaring State for squatting plague 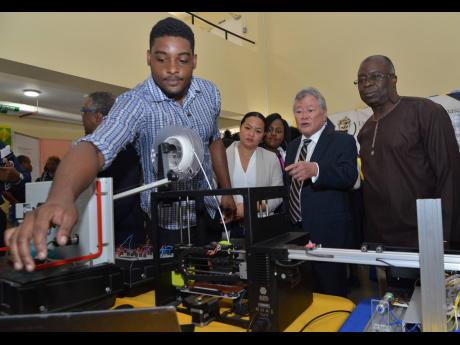 Jamaica’s progress continues to be hindered by the failure of policymakers to combine common sense with data-driven research to better inform national decisions, bakery mogul and philanthropist Gary ‘Butch’ Henrickson has said.

The chairman and CEO of Continental Baking Company challenged students attending Research, Technology and Innovation Day 2019 at the University of Technology (UTech) yesterday to lead the charge in lifting Jamaica from intellectually apathy, which, he said, paralysed its governance structure.

“We have to be a data-driven people [because] we no longer have the luxury of saying, ‘I think it is so.’ We have to say, ‘without a shadow of a doubt, ‘I know it is this because I have the data’. And if anything is true in life, it is that numbers are real, they are unchangeable,” he said, while delivering the keynote address under the theme ‘Research & Innovation … Fuelling a Bright Future’.

“Take the guesswork out, because mediocrity is not an option for us anymore as a people, as an individual, or as a nation. Our Jamaica cannot afford to be mediocre anymore.”

Explaining that hard work was key to success in the corporate world, Hendrickson charged the students to hold persons in positions of power to high and exacting standards.

“Demand of the people who represent you as leadership – whether political, in your business life, anything – demand of them the best because if they can’t understand the demand, then they don’t belong in the position. Think about all these little things for me.”

Hendrickson proceeded to cite an example of the “silliness” that he believes is emblematic of Jamaican bureaucracy and officialdom – not fixing little problems like the pothole-riddled intersection of Knutsford Boulevard and Trinidad Terrace.

“There is a puddle of water, and five weeks after they fix the road, there is (again) a puddle of water with potholes because nobody thought that when you wash the sidewalks of New Kingston, we need a drain. Now, do we really have to continue to do things like that?

“What we call a good road today, you must not accept that for the future because if you do, you will fail the next generation just like my generation is failing you now. And it is our challenge in the years left to say no more.”

Hendrickson also criticised structural deficiences that undermine good governance. He blamed a lack of visionary town planning as a major hurdle to efficient traffic management and the integrated establishment of public amenities like the recently demolished Constant Spring Market. The Continental Baking CEO said that municipal authorities did not understand that a comprehensive organisation of society, including facilitating access to accommodation for low-income residents, was a core responsibility of the State.

Vendors at the Constant Spring Market, some of whom have sold there for decades, were evicted as the Government pushed ahead with its modernisation of Constant Spring Road infrastructural upgrade, including a sewerage overhaul. Vendors were offered compensation and the market was knocked down last weekend.

Hendrickson also took a swipe at the phenomenon of squatting. There are an estimated 700,000-900,000 illegal settlers in Jamaica.

“Our authorities and those who govern us don’t understand things like facilitation of people and things moving. And yes, I am telling you, it is an accusation I am willing to stand by,” he declared.

“When people need a place to live and we, for whatever reason, don’t at least carve out certain areas, then what we have is squatting, and then everybody stands up and wring them hands, ‘Bwoy, we nuh want nuh squatters.’ What do you want them to do?”