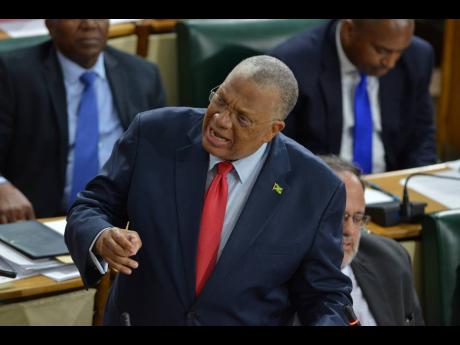 Phillips, the opposition leader and PNP president, committed yesterday that the repayment of student loans would only begin when graduates were employed.

“The monthly repayments of students’ loan will be capped at a percentage of income,” he explained.

Further, an administration led by Phillips would end the contentious and pervasive practice of contract employment.

“We will pass legislation requiring employers to treat so-called contract workers as full-time employees,” Phillips announced yesterday as he made his contribution to the 2019-2020 Budget Debate in the House of Representatives.

“The next PNP administration will bring an end to the use of the contract system to abuse our workers,” he added.

The commitments were among a mix of old and new measures outlined by Phillips as he hammered the Andrew Holness administration on the increasing murder rate, “rampant levels of bare-faced corruption”, and deepening inequity in the society.

He said that the PNP, if it regains state power in the next general election – constitutionally due in 2021 – would expand teacher training to global standards to provide a trained teacher in every classroom “in the shortest possible time”; provide tax relief that invests in certified training programmes for employees; and seek to reinstate the bauxite levy regime.

Phillips again indicated that his party would embark on a “massive” land-titling programme that would provide a quicker and easier path to ownership, as well as take steps to establish the ‘first-in-the-family scholarship’ initiative designed to fully fund the tertiary studies for the first child in every Jamaican family to enrol in a tertiary institution.

“The land-titling programme will be a critical plank in the rebuilding of the rural economy,” he explained.

“Our comprehensive land-titling programme will proceed simultaneously with enhanced access to finance so these small farmers can enter the mainstream of the national economy and reap the benefits,” Phillips added.

He cited the scandals uncovered at Petrojam, the state-owned oil refinery, the state-run firm National Energy Solutions Company Limited, and others that have dogged the Holness administration since it took office in 2016 and warned that more could be on the horizon. “From all reports, it nuh done yet,” the PNP president said.

“I ask myself all the time: Why is only the scandal bag them ban? Them should ban the whole bag a scandal,” he said, causing some lawmakers to erupt in laughter.

“This thiefing and mismanagement of public funds must stop,” Phillips underscored.

Amid the backlash over the PNP’s decision to withdraw support for the extension of the states of public emergency, the PNP leader questioned why the zones of special operations (ZOSOs), the signature anti-crime initiative of the Holness administration, were not being rolled out in crime-affected communities in the Corporate Area, Clarendon, St James, and Westmoreland.

“ZOSO provides for deployment of joint security forces on the ground. It gives the security forces the same powers as a state of emergency to detain suspects, search and cordon, etc,” he said, while acknowledging that unlike the states of emergency, ZOSOs did not facilitate indefinite detentions.