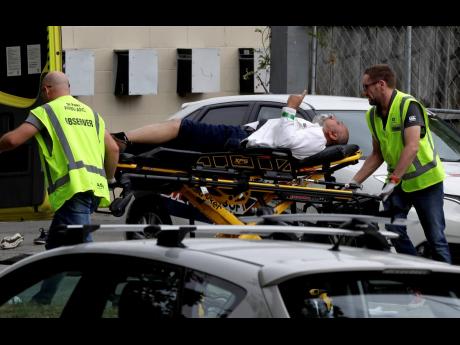 The Associated Press
Ambulance staff take a man from outside a mosque in central Christchurch, New Zealand, Friday, March 15, 2019. A witness says many people have been killed in a mass shooting at a mosque in the New Zealand city of Christchurch.(AP Photo/Mark Baker)

At least 49 people were killed in mass shootings at two mosques full of worshippers attending Friday prayers in an attack broadcast in horrifying, live video by an immigrant-hating white supremacist wielding at least two assault rifles and a shotgun.

One man was arrested and charged with murder, and two other armed suspects were taken into custody while police tried to determine what role they played.

“It is clear that this can now only be described as a terrorist attack,” Prime Minister Jacinda Ardern said, noting that many of the victims could be migrants or refugees.

She pronounced it “one of New Zealand’s darkest days”.

The cold-blooded attack shocked people across the nation of five million people, a country that has relatively loose gun laws but few gun homicides and is so peaceful that police officers rarely carry firearms. New Zealand is also generally considered to be welcoming to migrants and refugees.

The gunman behind at least one of the mosque shootings left a 74-page manifesto that he posted on social media under the name Brenton Tarrant, identifying himself as a 28-year-old Australian and white nationalist who was out to avenge attacks in Europe perpetrated by Muslims.

Using what may have been a helmet camera, he livestreamed to the world in graphic detail his rampage at Christchurch’s Al Noor Mosque, where at least 41 people were killed as he sprayed them with bullets over and over, sometimes firing at victims he had already cut down. Several more worshippers were killed in an attack on a second mosque in the city a short time later.

At least 48 people were wounded, some critically, authorities said.

Police did not immediately say whether the same person was responsible for both shootings. They did not identify those taken into custody and gave no details about them except to say that none had been on any watch list.

While there was no reason to believe there were any more suspects, the prime minister said that the national threat level was raised from low to high. Police warned Muslims against going to a mosque anywhere in New Zealand. And Air New Zealand cancelled several flights in and out of Christchurch.

Police said the investigation extended 360 kilometres (240 miles) to the south, where homes in Dunedin were evacuated around a “location of interest”. They gave no details.

Prime Minister Andrew Holness has described as a horrible tragedy the attacks in Christchurch, New Zealand.

“This heinous act must be condemned by every nation as it strikes at the heart of the values of freedom and democracy. Jamaica mourns with New Zealand,” he said.

“We extend our deepest condolences to the families of the victims of these attacks in #Christchurch @NZinOttawa. We in #Jamaica stand with your government and people in support of peace and tolerance, and against #Terror,” Johnson Smith tweeted.

The People’s National Party’s Opposition Spokesperson on Foreign Affairs, Lisa Hanna, also expressed sorrow at the tragedy. She said the attack on the innocent during morning worship at the mosque was “a reminder that we must never relent in our vigilance against extremism and wanton acts of terrorism”.

New Zealand’s prime minister said that immigrants and refugees “have chosen to make New Zealand their home, and it is their home. They are us.” As for the suspects, Ardern said, they harbour “extremist views that have absolutely no place in New Zealand”.

Witness Len Peneha, who went into the Al Noor mosque to help victims, said he saw a man dressed in black and wearing a helmet unleashing dozens of shots, followed by people running out in terror.

“I saw dead people everywhere. There were three in the hallway, at the door leading into the mosque, and people inside the mosque,” he said. “I don’t understand how anyone could do this to these people, to anyone.”