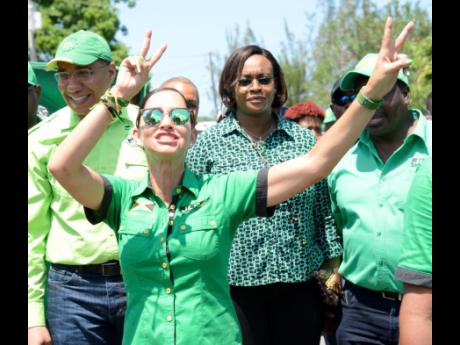 Holness, who was in the constituency yesterday for nomination day activities, addressed the issue after Phillips cried foul.

Among the charges levelled at the Holness administration is that there has been unadulterated spending of government resources to fund road-repair and bush-clearing work in sections of the constituency.

Those accusations were the basis on which Parchment Brown penned a letter to Holness days ago, calling him out on the allegation, and has called for a halt to all works being done in East Portland by private contractors without receiving authorisation from public officials.

But Holness, while confirming receipt of the correspondence, rejected the claims that state resources were being used to sway voters.

“I have gone through and asked all the agencies whether or not they have made allocations or made payments. So far, what I have been told is that no allocations have been made other than what was made previously and that whatever was in train was stopped,” Holness said outside the Port Antonio courthouse in Portland yesterday.

Holness tagged the charges made against his administration as hypocritical.

“The truth is, you will recall several elections ago that the then general secretary of the PNP openly admitted to vote buying in Westmoreland. Where was the ombudsman then in speaking out on these things?” Holness questioned.

He also pointed to other alleged instances of abuse of state resources when the PNP was in Government, while acknowledging that those examples should not excuse his administration from adhering to good governance.

The political oumbudsman had ordered, on Wednesday, a stop to all non-state roadworks and other clean-up programmes.

“The prospective candidate and the JLP may not have requested or received approval for work to be done on government installations. It is unclear whether these works are being supervised by any state agency or under any contract to protect the owners from future liability for harm or defects. Supervision by a state agency in these circumstances would be inappropriate,” the letter read.

Two weeks ago, The Sunday Gleaner reported on a roadwork blitz being conducted in several communities across East Portland. Some PNP supporters interviewed claimed that they were not benefiting from job opportunities because of their political affiliation.