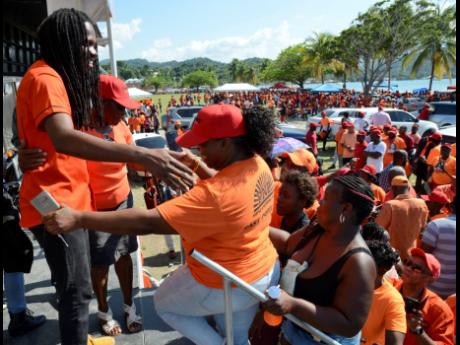 Ian Allen
Damion Crawford (left) greets supporters shortly after he addressed them at Folly Oval on nomination day, March 15, for the April 4 by-election.

Damion Crawford, the man who Friday became the candidate for the People’s National Party in Portland Eastern, said his focus is on selling a “politics of independence” to the people of that constituency.

And although he was just been introduced to the constituency a mere three weeks ago, he believes his message has already started to resonate with those he has been itching to represent in Parliament following the April 4 by-election.

“The campaign has been going excellently so far. The PNP [supporters] are excited and they are riled up to start this movement – this ideological change and this politics of independence,” Crawford told The Gleaner at the Folly Oval in Portland where he had gathered with a number of Comrades following Friday’s nomination day activities.

He said he was surprised by the overwhelming support he has received since being formally introduced to constituents.

“I was worried coming down, knowing that as a non-Portlander, you might not have been accepted in the same way, but they have really taken me on as a son or as a brother or anything that they see as a family member,” he said, mentioning that many persons who shared his last name resided in the eastern parish – a discovery he made while on the hustings.

With the usually peaceful constituency now divided across party lines, Crawford argued that it will not be much of a challenge for him to heal the wounds after the by-election.

“Dem nuh really have nuh support. They are importing a lot of people and they won’t have to be unified,” he bantered, referring to the organisation of the Jamaica Labour Party political machinery showing robustness in Portland Eastern which it had not won in more than 30 years.

“But at the end of the day, we are going for all people. We want the Jamaica Labour Party supporters in East Portland to understand that we appreciate their participation in the political process because you can’t have everybody in one church, but when we finish being the member of parliament for East Portland, it is for all persons,” he further said.

Crawford was also quizzed by the The Gleaner on how he planned to incorporate the needs of the constituents into what he had already prepared to be executed should he turn out victorious on the night of the by-election.

“One thing we have to incorporate in the plan is a reminder to all the students that there are 14 parishes in Jamaica, and not 13,” he quipped, in an apparent jab at a gaffe by Vaz.

“But generally, I think a BPO (business process outsourcing), that is something that a lot of the young people have been talking about. Here, there is a good catchment area for BPO,” he said.