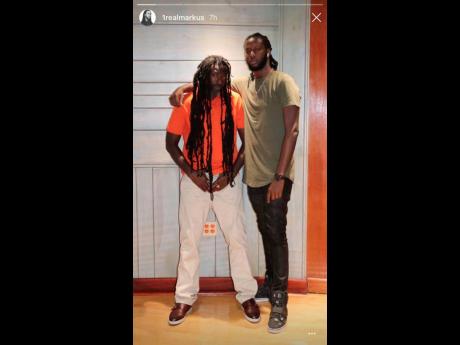 Mark ‘Buju Banton’ Myrie and his son Mark ‘Markus’ Myrie Jr pose in a photo that was posted by Markus on his Instagram page on Monday.

Despite a gesture of reconciliation towards Buju Banton, his son Mark Myrie Jr has implored the dancehall star to be a better father.

The two were allegedly involved in an altercation two days before Banton’s major Long Walk to Freedom concert at the National Stadium, which led to Myrie Jr filing a police report, accusing his father of physical abuse. The younger Myrie took to social media with his grouse, posting a series of harsh comments about Buju, whose real name is Mark Myrie Sr.

However yesterday, Myrie Jr expressed remorse for the comments he made about his father in an Instagram post saying, “My only regret is that I allowed myself to get so blinded by anger, that I said things about my father that I shouldn’t have said, but let he without sin, cast the first stone. I have no hatred in my heart for my father”.

In imploring Banton to be a better dad, Markus said his “only disappointment is the undelivered expectation of a father who refuses to see fatherhood as more than just a title and financial support. Your absence has nothing to do with prison and you know that. Still, I forgive you regardless. I hope one day you decide to be a better father. Don’t do it for me, do it for my siblings who are suffering (emotionally)”.

Grabbed by the throat

On Sunday, Superintendent of Police Leighton Gray, who is in charge of the St Andrew North Police Division in which Myrie Jr filed a report, told The Gleaner that despite a formal complaint being made, the police could take no action unless Myrie Jr presented a medical report substantiating his claim that during a meeting he was called to by his father, he was grabbed by the throat and punched in the mouth. He also alleged that he was pushed against a wall, where Banton continued to squeeze his throat.

Yesterday, Myrie Jr posted a string of comments, expressing regret about his hostile social media posts about his father, among other things. He also posted a picture of himself standing side by side with, and hugging, the elder Myrie.

The Gleaner tried to get a comment from Gray about how the police would now treat with the matter, but calls to his cellular phone went unanswered.