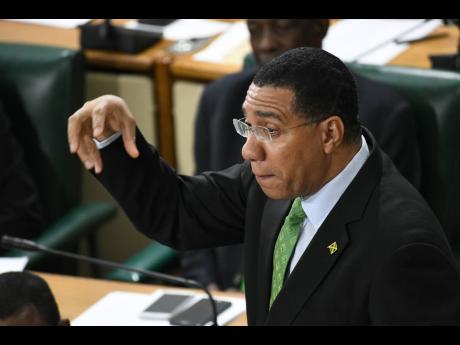 Prime Minister Andrew Holness yesterday announced plans by the National Housing Trust (NHT) to increase the limit for loans by $1 million, raise the ceiling for construction loans, while reducing interest rates for all contributors. He declared that now was the time for Jamaicans to pursue their dream of home ownership.

Jamaica House confirmed that effective May 1, interest rates for all NHT beneficiaries will decrease by one per cent; the entity’s loan limit will jump by 18 per cent from $5.5 million to $6.5 million; while construction loans will be set at the value of a two-bedroom house in the scheme where the service lot is purchased instead of the difference between the cost of the lot and the NHT loan limit.

Further, Holness said that the NHT’s minimum income band is to increase from $12,000 per week to $15,000 at the same zero per cent interest rate, “thereby allowing more persons to access the home grant”.

As a result, other income bands will be revised upwards and attract lower interest rates. Holness indicated, as an example, that a beneficiary who falls within the revised $32,001-$42,000 weekly income range and has a $5.5-million mortgage now pays six per cent interest, calculated at $38,144 per month.

Under the new regime, he said, the same beneficiary will pay three per cent interest, thereby reducing the monthly payment to $27,868.

“Don’t be afraid of prosperity,” he said, during his contribution to the 2019-2020 Budget Debate in the House of Representatives.

The prime minister acknowledged that the initiatives would cost the NHT $1.2 billion, but said that some of that would be offset by policy change, which, among other things, would allow the trust to transfer unclaimed contribution refunds to income 10 years after they become due.

Holness, in explaining the increase in the limit for NHT construction loans, said approximately 65 per cent of contributors who benefit under the service lot programme have indicated that the amount they receive, typically between $2 million and $2.5 million, was inadequate for housing construction.

“With more than a half of all NHT lots yet to be built on, the NHT proposes increasing the construction loan limit for NHT-serviced lots in an effort to stimulate activities in this area,” he reasoned.

Holness also unveiled the NHT’s newest initiative, an intergenerational mortgage programme aimed at allowing younger siblings or the child of a beneficiary to agree to carry the mortgage obligation – subject to affordability – when the older mortgagor retires or dies.

The beneficiary will be required to present the NHT with an ‘heir’ who must be a younger sibling or child and who will consent to repaying the outstanding amounts of the cost of the asset, which will be adjusted to current values.

“The cycle may be repeated for a second heir to take over the housing solution,” Holness said, adding that a maximum of 10 per cent of all constructed NHT housing solutions would be accessible under this programme in the initial stage.