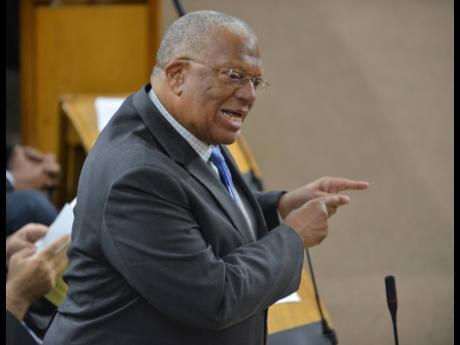 Kenyon Hemans
Leader of the Opposition Dr Peter Phillips speaking in the House of Representatives yesterday. He earlier addressed a presss conference at the PNP’s Old Hope Road headquarters.

The Opposition People’s National Party wants the full weight of the law brought to bear on everyone who has so far been implicated in corruption at the Ministry of Education, which resulted in yesterday’s axing of portfolio minister Ruel Reid.

His sacking is the second forced departure in less than a year of a Cabinet minister following on the heels of the former energy minister, Dr Andrew Wheatley, who was pressured to resign at the height of the Petrojam scandal that erupted last year.

“The hasty removal of the minister of education is in response to our demand for a full investigation of activities at the Ministry of Education in light of credible reports of corruption, nepotism, and misappropriation of public funds involving that ministry and its associated agencies.

“Our report indicates the depth of the cancer of corruption that has now engulfed the Holness administration,” Opposition Leader Dr Peter Phillips said.

Phillips said that the new allegations were particularly galling because investigations into the Petrojam scandal by the Integrity Commission and the Major Organised Crime and Anti-Crime Agency are still not yet complete.

He also said that reports indicate that the alleged corruption at the Ministry of Education had tentacles in several of its related agencies, including the Caribbean Maritime University, the National Education Trust, and the HEART Trust/NTA, which, Phillips said, was subsequently transferred to the Office of the Prime Minister.

“All have been implicated in this web of corruption. I am again calling on the auditor general and the National Integrity Commission, as well as the security agencies, including the Jamaica Constabulary Force, the Major Organised Crime and Anti-Corruption Agency, and the Financial Investigations Division, to fully investigate the allegation that caused the resignation of the minister,” stated Phillips.

“We expect them to act with integrity and urgency to hold those who broke the law accountable. Indeed, we note that the prime minister has not yet said what was the basis on which he asked for the resignation, and we are calling upon him to do so immediately,” the PNP president said.

Phillips said that amid reports received, the security agencies are being hampered in the conduct of their investigations, and as such, he is calling all the heads of the security agencies to act with integrity and urgency, “mindful that you ultimately represent the last line of defence that the country has against wanton corruption and the abuse of taxpayers’ money”.