Samuda to stand in for discarded Reid 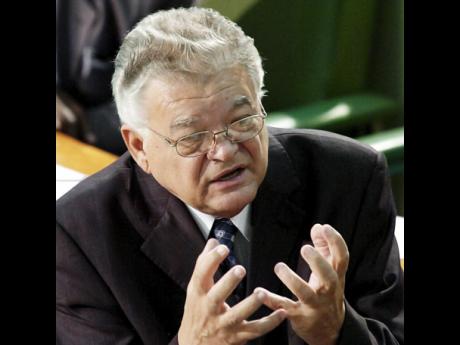 Samuda is a minister without portfolio in the Ministry of Economic Growth and Job Creation whose remit included oversight of water, housing and infrastructure.

“I have assigned, earlier today, Minister Samuda to go over to the Ministry of Education and to assist. My office will undertake a review of the Ministry of Education. We don’t expect to be doing that review for more than a month or two,” stated Holness in response to queries from Leader of the Opposition Dr Peter Phillips in Gordon House on Wednesday.

“It is a large ministry, and we will be doing a full review of the ministry,” the prime minister added.

It follows the shock sacking of Education Minister Ruel Reid and demands from the opposition leader to address a series of concerns. Reid also resigned from the Senate.

“I will go off the island tomorrow and return on Sunday, and by then I should be able to make an appointment to the Senate and fill the constitutionally required position in the Cabinet,” added the prime minister.

Holness and four other Caribbean leaders are scheduled to meet with United States President Donald Trump today at Trump’s Mar-a-Lago resort in Florida.

The Jamaican Constitution requires at least two members of the Cabinet, but not more than four, to be drawn from the Senate. Currently, Kamina Johnson Smith, minister of foreign affairs and foreign trade, is the only senator in the Cabinet.

Holness added that the Ministry of Education could operate without a minister for the duration of the upcoming Primary Exit Profile (PEP), a series of exams to replace the Grade Six Achievement Test as an entrance test into high school. The permanent secretary will also issue a full report on the functioning of the ministry.

“I wish to assure the public that the Ministry of Education has a strong bureaucracy, not in the negative sense, but it has a very strong public administration culture and, therefore, the operations will continue unimpeded, and I am expecting that the new exams, PEP, will go off without any difficulty. I will receive a report tomorrow specifically on that as to the preparations,” he stated.

Holness indicated that the Government was serious about dealing with “allegations of corruption, malfeasance, maladministration”. He charged that his administration aimed to set a standard of accountability that could not be questioned.

He, however, did not reveal the specific allegations surrounding Reid’s forced resignation. On Wednesday, the Jamaica Teachers’ Association expressed shock at the sudden resignation of Reid and added that it would monitor developments.

“Issues have been raised in the public domain which have caused me to have a conversation with the minister. After that conversation, it appeared to me that given the sensitivity of the Ministry of Education, the best thing to do would be for the minister to tender his letter of resignation so that the processes would have been established,” stated Holness.

Holness added that he would intervene once there was a serious threat to best practices in governance.

“I have to intervene and ensure that those problems are not systemic or deep rooted, and if they are, to correct them. That is what I did with Petrojam and the Ministry of Energy,” he said, referring to the months-long corruption scandal at the state oil refinery.