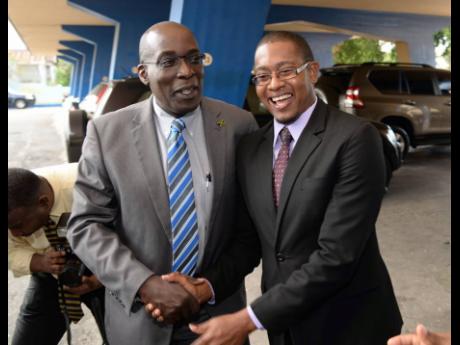 Jermaine Barnaby
Then Minister of Education Ruel Reid and his state minister, Floyd Green, are jovial as they take up their posts on March 8, 2016. Weeks before Reid’s sacking, Green was reassigned to the Ministry of Industry, Commerce, Agriculture and Fisheries.

Forty-eight hours after the sacking of Education Minister Ruel Reid, sector leaders have expressed difficulty in identifying a clear successor.

Reid was forced to tender his resignation as minister and government senator on Wednesday following allegations of corruption involving the Caribbean Maritime University, National Education Trust, and the HEART Trust, which fall under the education ministry.

One such industry leader who is grappling with picking Reid’s replacement is president of the Private Sector Organisation of Jamaica (PSOJ), Howard Mitchell.

“There are experienced politicians in the party. There is Marisa Dalrymple [Philibert]. I doubt that Floyd Green would want to go back there, but he has had some experience,” Mitchell told The Gleaner yesterday evening.

“Other than that, it’s a little difficult to find an experienced person who has had a ministry, but Karl Samuda is an active, experienced minister. It could be conceivable that he could stay there,” Mitchell said yesterday in an interview with The Gleaner.

President of the Jamaica Civil Service Association, O’Neil Grant, expressed similar sentiments, but said there are those outside of the political realm who may be capable of taking over the reins of the ministry.

“I am not very familiar with the skills and competencies of persons without portfolios in the Government, so I’m even at a loss as to say who should be the next minister of education. There are persons who are competent in the field of education that could, in fact, chart a proper course for the minister.

“We know that there are persons who are very versed at The University of the West Indies on how to treat with the challenges of education in Jamaica, but there are not in the political realm, and I don’t want to call names,” Grant said.