RJRGLEANER-Don Anderson Poll | So what if a 500-y-o wants to be MP? - Veteran Charles shuts down talk of retirement age for politicians 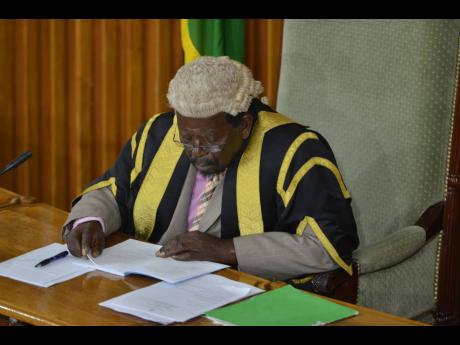 Kenyon W Hemans Ke
Pearnel Charles Sr, speaker of the House, pores over a document in the House of Representatives recently. The 82-year-old says age should not be a barrier to being a lawmaker.

Eighty-two-year-old Pearnel Charles Sr has come out swinging against assertions that a retirement age should be imposed on Jamaican lawmakers.

He was responding to the latest RJRGLEANER-commissioned Don Anderson poll, which revealed that an overwhelming 91 per cent of Jamaicans believe that there should be retirement cap on politicians.

The poll also revealed that six per cent believe that there should not be a retirement age, while the remaining three per cent were not sure.

Charles, speaker of the House of Representatives, has been member of parliament for the North Central Clarendon constituency since 2002 and served three consecutive terms in Eastern St Thomas before that. He was also an opposition senator from 1972-80.

“So I don’t think that you need to tell me that I can’t represent people whether my experience and my age because you feel I am too old or too young,” the senior parliamentarian added.

Meanwhile, executive chairman of Caribbean Community of Retired Persons (CCRP), Jean Lowrie-Chin, said she, too, does not support the view that politicians should have a retirement age.

“I think we should not discount the value of experience in leadership positions, and we should be very careful that we don’t deprive Jamaica of the wisdom and the experience that the more senior leaders can bring to the table. You know, in some cases, we have some leaders up to the age of 80 who do well,” the CCRP head said.

However, sociologist Dr Orville Taylor says that the retirement age ought to be the same across all branches of the public service.

“You have to have a consistent set of rules when it comes to the human resources of the country. And if you have a retirement age for public servants and they are the lifeblood of government, then it makes absolute sense that you should have a ceiling on the age that our legislators work up to, because we have a ceiling for our judiciary, which is another arm of government, so it makes sense to me, given the kind of argument they’d like to use to support it,” Taylor said.

The poll was conducted from February 15 to March 5, 2019 among 1,003 Jamaicans across the island. It had a margin of error of plus or minus five per cent.