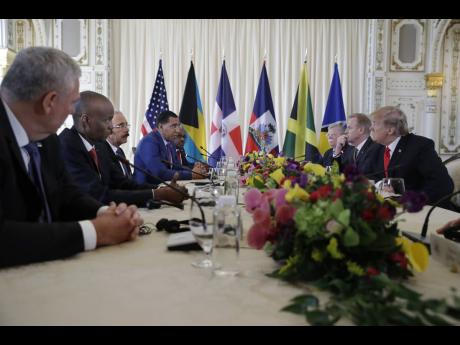 As the meeting between the United States president and five Caribbean leaders got under way yesterday at his Mar-a-Lago club in Florida, Donald Trump told the select heads of government from the region that he would be “discussing ways that we can be beneficial to you and you can be beneficial to us.”

Trump hosted the leaders of Jamaica, Bahamas, Haiti, Dominican Republic, and St Lucia at his club, referred to as the crown jewel of Palm Beach, to show his support for Caribbean countries that back democratic transition in Venezuela.

The five have either denounced Venezuela’s Nicolás Maduro or joined more than 50 countries in recognising Juan Guaido as the rightful interim leader of the nation.

While the Caribbean leaders met with Trump to discuss the crisis in Venezuela, the US government announced additional sanctions against the South American country in response to what it describes as the illegal arrest of opposition leader Juan Guaido’s chief of staff.

“The regime’s continued use of kidnapping, torture, and murder of Venezuelan citizens will not be tolerated by the US or the international coalition that is united behind President Guaido,” said Treasury Secretary Steven Mnuchin. “Roberto Marrero and other political prisoners must be released immediately.”

The US had already sanctioned scores of top Venezuelan officials and has blocked US banks from doing business with that country, imposing a financial strangle-hold on the cash-strapped nation. The sanctions announced Friday also came as members of Congress from both parties condemned Marrero’s arrest. They described it as a kidnapping.

“The international community is closely watching Maduro’s actions and will respond accordingly to any that threaten the safety of the opposition and Interim President Juan Guaidó,” said Rep Michael McCaul, R-Texas.