US$96m imports that could be supplied locally irk JMEA president 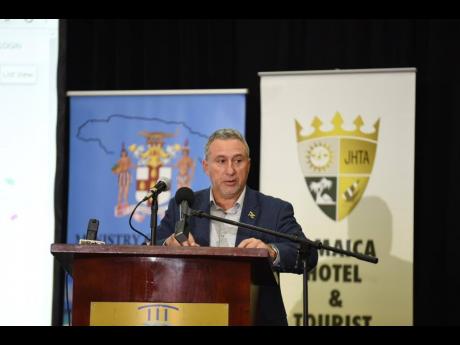 Albert Ferguson photo
Metry Seaga, president of the Jamaica Manufacturers and Exporters’ Association, addressing buyers and suppliers in the tourism industry at a tourism linkages speed networking event sponsored by the Tourism Enhancement Fund, at the Montego Bay Convention Centre in St James on Wednesday, March 20.

Metry Seaga, president of the Jamaica Manufacturers and Exporters’ Association (JMEA), is questioning why Jamaica had to import J$96 million worth of household items, confectionery goods, assorted juices, and carbonated beverages that could be supplied locally, at a time when economic growth remains below two per cent.

He raised the question while addressing a tourism linkages speed-networking event hosted by the Tourism Enhancement Fund, at the Montego Bay Convention Centre in St James on Wednesday.

“Soaps, detergents, perfumes, cosmetics, shampoos, and body lotions were imported at a value of US$29 million, and an additional US$67 million was spent importing sauces and condiments, pastries and biscuits, banana and plantain chips, confectionery, juices, and sodas. This is simply unacceptable,” said Seaga.

According to the JMEA president, the country’s import bill increased significantly to US$1.6 billion in the third quarter of 2018, up from US$1.3 billion in the second quarter.

“So it begs the question, and in fact it begs many questions, including why is our economy only growing at a rate of 1.8 per cent, and there is a clear correlation to our high import bill,” said Seaga.

“Our beloved country has continued to signify greatness throughout the world in many shapes and forms ... when it comes to our quality products and renowned Jamaican brands. At our best, we have sold what Jamaica has to offer, to almost every single corner of this earth.”

Seaga noted that Jamaica could become an economic success if the nation’s companies take advantage of its entrepreneurial strength and the talent of young people seeking to succeed in the workforce.

“Our products are highly regarded and continue to do well in international markets. I can guarantee that there is a young Jamaican somewhere on this island cooking up or designing something new, that will take the world by storm, someday soon,” said Seaga.