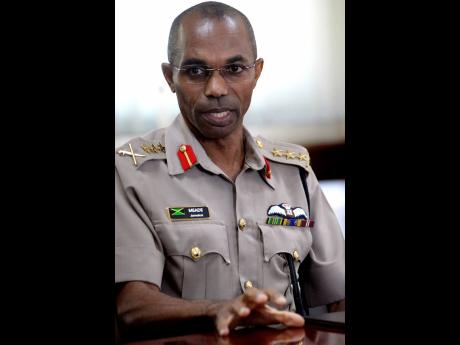 Lionel Rookwood
Lt Gen Rocky Meade: “I recently dismissed three soldiers for operating while on duty in a way that I did not find acceptable.”

Only two reports against members of the Jamaica Defence Force (JDF) were made to the Independent Commission of Investigations (INDECOM) last year, but JDF commanders say several other soldiers were disciplined or fired following altercations with civilians.

INDECOM reported last week that there were 699 civilian reports against members of the Jamaica Constabulary Force (JCF) last year and 42 involving members of the Department of Correctional Services (DCS). Routinely, the police force interacts with citizens far more regularly, and in denser numbers, than do soldiers.

There was only one report of civilian violation by security forces carrying out joint activities – including those in the recently concluded zones of special operations (ZOSOs) in Denham Town, Kingston, and Mount Salem, St James.

“We have had very few cases, but we have dealt with them very strongly. I recently dismissed three soldiers for operating while on duty in a way that I did not find acceptable in terms of their interaction with a citizen of Jamaica,” said Lieutenant General Rocky Meade, chief of defence staff of the JDF, during a recent Gleaner Editors’ Forum.

Launched in July 2017, the Law Reform (Zones of Special Operations) (Special Security and Community Development Measures) was introduced to contain crime, and at the same time, to safeguard the rights of citizens through community development and social intervention.

Under the ZOSOs, which ended this year, soldiers were given special powers, including that of arrest, which they do not possess outside of the SOE Act. That does not change the high level of professionalism and respect for human rights that is expected of JDF members, Meade said.

“Although the SOE Act has set a bar, we have adopted it across the force. So they all get the training and the guidelines as to how to treat with our citizens, and I want it applied across the board to every citizen in ZOSO or not,” said Meade.

“I had a situation where someone was on the road and acted in a way that I was not happy with based on the evidence, and in addition to our internal discipline, they are no longer serving,” he added, noting that undisciplined soldiers face both punitive and administrative sanctions.

“You may do something and it calls for a certain punishment, but then you have further told me something about your character, and based on your character, I may not think that you are worthy of wearing the uniform any further. We are very firm about it,” Meade said.

In March last year, there were complaints by residents of Denham Town and Mount Salem that following ZOSO, gunmen would return to the area with a vengeance as some JCF and JDF members were having sexual relations with women in the communities.

There were reports that at least one woman was impregnated by soldiers in Denham Town while a resident of Mount Salem noted, “When you pass some yards, a pure soldier clothes you see on the line” as she argued that some soldiers were living with women in the zone.

“No facts have come to me with respect to that. I have heard the anecdote, and I, last year, put out a policy about sexual relations within the force and also with civilians and persons who we have a duty to protect in an operational area,” the army chief said.

“To the extent that I have heard stories, I have put out a clear policy in writing. I am yet to have a case brought that breaches that policy.”