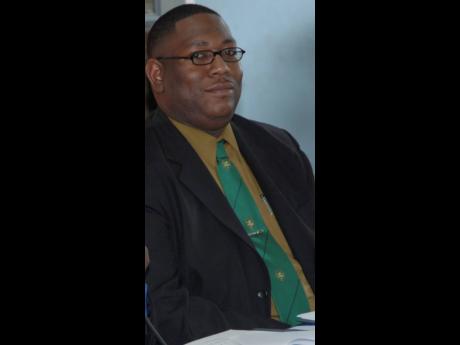 Calabar High School’s acting principal, Calvin Rowe, has fired back at physics teacher Sanjaye Shaw, accusing the educator of attempting to overstep his boundaries in wanting to dictate what punishment should be meted out to track stars DeJour Russell and Christopher Taylor.

Shaw accused both athletes of assault, stemming from a December 15, 2018 incident while the two were at a track and field camp at the school. He said the fuss started over mattresses he was trying to borrow from the track team for participants in his physics camp. He accused Rowe of failing to effect just and timely punishment.

According to a release issued by Rowe yesterday detailing what he said are facts, investigations began on December 16, 2018.

“There were conflicting accounts on key aspects, for example, the two students involved strongly denied assaulting Mr Shaw. While one student admitted shoving the teacher’s phone from the face of his teammate, he was adamant that he did not step on the instrument,” Rowe said, contradicting reports by Shaw.

“Noting the conflicting reports and the lack of evidence of any assault on video footage (provided by Shaw), we decided not to escalate the matter to the board but to deal with it at the level of the school’s senior leadership.”

A meeting was convened with Shaw on February 1, 2019, which was attended by a member of the coaching staff, a vice-principal and the Jamaica Teachers’ Association representative on staff. Rowe explained that the meeting concluded with Shaw wanting reimbursement for the repair of his phone and medical costs. According to Rowe, he also demanded that the boys be suspended.

Rowe said: “He was advised to submit documentation for the first two, and that the nature of the punishment was the prerogative of the principal. With the matter satisfactorily resolved, we delivered strong reprimand to the students for disobeying a direct order from the teacher not to enter the classroom [where the incident occurred] and awaited receipt of the documentation for repairs to the phone and the medical bill.

“Signs of Shaw’s dissatisfaction manifested later, when he visited my office to ascertain if the two students had been suspended. He made it clear that the phone repair and the medical bill were no longer important to him. It was the suspension he was interested in. The students were reinterviewed, and while their testimonies remained unchanged, I decided to suspend them for five days. [However], they were allowed to train and compete in their final development meet.”

Rowe was adamant that the punitive measures were to address disobedience to the teacher’s directive and not for assault.

“We assumed the matter was finally satisfactorily behind us and were shocked to learn on Thursday, March 21, of a pending press conference being organised for Mr Shaw to air his grouse.” Rowe said the “saga has served as a teaching moment for students, staff and stakeholders and will assist in our constant review of our processes and practices. We are confident that this matter will result in renewed commitment to our motto, ‘The Utmost for the Highest’”.

Calabar old boy and former parent-teacher association president, Paul Taylor, pointed fingers at the school’s leadership for a breakdown in respect for authority.

“There is a serious problem of discipline and respect for authority at the school, which I attribute to a breakdown in leadership. The issue, for me, is not what occurred or the parties involved, but rather, why did these boys feel they could do this?” Taylor said in a Facebook post.

“Who made it okay for these things to happen? Why was this not dealt with [expedientiously] and with sufficient force to deter these kind of things from happening? Things like these would have been dealt with swiftly and decisively by the powers that be in my day and we weren’t the best behaved either. Why? What has changed? One word: leadership,” he added.