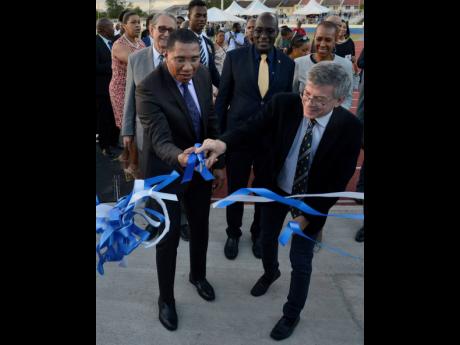 The Jamaica College (JC) board of management has disputed public statements made by Prime Minister Andrew Holness that his Government donated $30 million to the construction of the school’s state-of-the-art stadium.

Further, the board revealed that it has had discussions with discarded Education Minister Ruel Reid and has agreed that he will proceed on leave while an investigation is conducted into the “serious allegations made against him and which we understand prompted the prime minister to request his resignation.”

“We have noted various allegations made against Mr Reid in the media. Our board chairman has sought, but has not yet received, an audience with the prime minister,” the board said.

Addressing the official opening ceremony for the eight-lane Ashenheim Stadium located at JC’s Old Hope Road compound, Holness announced that the Ministry of Education and the Ministry of Culture, Gender, Entertainment and Sport donated a total of $30 million towards construction of the facility.

“The old boys’ association of JC has done an amazing job. The Government recognised this effort and made a small contribution. Through the Ministry of Sport (Sports Development Foundation), $10 million was allocated and the Ministry of Education made a contribution of $20 million,” Holness said on February 20.

But the JC board, in a statement yesterday, acknowledged that the school received $10 million from the Sports Development Foundation “on the day of the official opening of the facility, while noting that similar grants were made to other schools that built sporting facilities.

It is not clear whether the $20 million which was earmarked was disbursed or reallocated for another purpose.

“We are most grateful for this contribution which will be used to acquire maintenance equipment and services and construct additional bathroom facilities for the stadium,” the statement said.

“No other funds have been received from Government for the stadium. The Jamaica College Ashenheim Stadium was fully funded by a most generous donation from the Ashenheim family,” the board insisted, adding that it would welcome the additional support as the facility will benefit not just the school community, but the wider Jamaica.

According to the statement, Reid, who served as JC principal for 10 years, was not paid a salary by the school while he served as education minister.

However, the board said he was allowed to remain in the house owned by the Jamaica College Trust and assigned to the principal.

Reid had been seconded as education minister in 2016 and given an additional three years’ leave of absence in 2018.