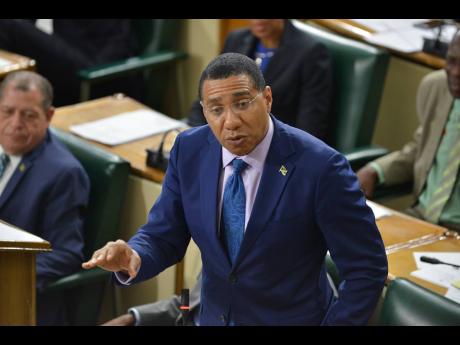 Prime Minister Andrew Holness is being viewed more favourably than his Jamaica Labour Party (JLP) Government, which “is bad news” for the Opposition People’s National Party (PNP), according to an analyst of the recently commissioned RJRGLEANER Don Anderson poll.

A sample of 1,003 respondents polled on the issue islandwide between February 15 and March 3 gave Holness the thumbs up in terms of his overall performance.

Holness received a significant overall rating of 88 per cent, with 48 per cent of the respondents saying his performance has been positive, while 37 per cent said it was average. A further 15 per cent viewed his performance as negative.

Forty per cent of the respondents said that the Government’s performance was positive, with 43 per cent saying it has been average, and 17 per cent believing it to be negative.

Sociologist Dr Orville Taylor said that the numbers indicate that the PNP will have its work cut out for it to counter the Government’s message.

“This poll is bad news for the Opposition, I think overall, because there is a 17 per cent negative rating for the Government and if people really thought the Government was doing badly, the numbers would have been much larger and decisive,” he told The Gleaner.

He said that were the poll a distribution curve, it would be skewed in a positive direction in favour of the Jamaica Labour Party and its leader, with Holness being viewed even more positively than his party.

“Just about half the people in this country are very clear that Holness is doing a positive job, while more than a third thinks he is doing a reasonably good job. It clearly does not look good for the Opposition overall,” Taylor added.

Public affairs commentator the Rev Peter Espeut noted that the poll showed that those who had a positive view of the performance of the Government were twice the number of those who held a negative view.