‘Out of Many’, one - Design Collaborative team wins parliament design competition 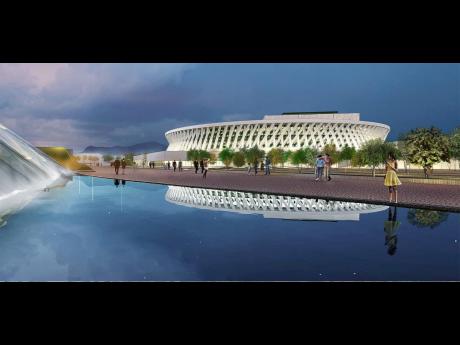 From a field of 24 entries in the Government of Jamaica’s Houses of Parliament Design Competition, one stood tallest yesterday.

‘Out of Many, One People’, the submission from the Evan Williams-led team of architects from the 46-year-old architectural firm Design Collaborative was declared the overwhelming choice for the state-of the-art complex to replace Gordon House as the country’s meeting place for the Houses of Parliament.

Members of the team erupted in jubilation, hugging each other and family members as they were declared winners of the $5 million top prize as well as the People’s Choice Award.

Organised by the Urban Development Corporation (UDC), the competition was opened last May and invited submissions from Jamaicans at home and in the diaspora.

Entries were received from Jamaicans in the United Kingdom, Trinidad and Tobago, Guyana, the United States, Argentina, Italy, Canada, Serbia, Turkey, and Iran, who submitted their best architectural representation of what the new Houses of Parliament complex should look like. The concept, as outlined in the competition design brief, includes a Parliament complex to be located within the confines of the National Heroes Park, nestled among passive recreational spaces, gardens and green areas, thereby requiring the entire multipurpose site to operate as a cohesive cultural and heritage environment.

“People have asked what prompted our design, and I keep saying it is our motto, ‘Out of Many, One People’. We wanted to design a great, iconic building. We didn’t want a regular-looking office building, so we endeavoured to create just what we have now, a statement building,” said Williams told The Gleaner last year.

“When you think of countries around the world, it’s their buildings which obviously come to mind, and these reflect that country. We see that in the White House in Washington. It makes a statement to the world, one of power and influence.”

He stated that it is that kind of powerful statement that Jamaica’s new Parliament building must exude.

“Our seat of power and authority must also be a standout building that inspires our leaders and incites our people to achieve greatness. So we felt that this building should reflect that image. It should be a statement that everyone can relate to, not only locals, but when people living elsewhere think of Kingston, they must think about this building first,” Williams reasoned.

“The building’s façade articulation references the country’s colonial and classic design vernacular. We cannot deny that we are an ex-colony, and most of the buildings that are recognisable in Jamaica, we get them from our colonial past,” noted Williams.

“Interestingly enough, even some of our domestic architecture reflects that Georgian influence, so I didn’t want to deny that because that’s part of who we are. But on the same hand, I didn’t want it to be the overbearing statement.”

Construction of the new parliament building is expected to begin by 2021.