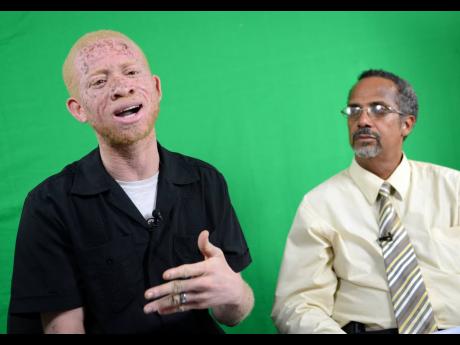 The Calabar High School physics teacher who last week went public with allegations that he was assaulted by two of the school’s top athletes says that despite criticism being levelled at him on social media that he wanted to tarnish the future of the track stars, he actually wishes them well.

In an interview at The Gleaner’s North Street offices in Kingston yesterday, Sanjaye Shaw extended best wishes to Christopher Taylor and Dejour Russell, who are participating in the ISSA/GraceKennedy Boys and Girls’ Athletics Championships under way at the National Stadium.

Although he has retained the legal services of Lord Anthony Gifford and is awaiting further advice, Shaw said that he has decided to hold off on pursuing legal action against the two for the alleged assault stemming from an incident at the school last December.

He pointed out that he harboured no resentment or jealousy towards Taylor, Russell – or any other sportsman – for their athletic prowess but was seeking justice for physical harm done.

“I have no reason to be jealous of the students. I have been working at the school for four years. I am not the type of person to want to bring students to the principal’s office. The records can prove it, that I have never brought anybody to the office requesting disciplinary action before this incident. I am a simple person, and an apology is what we started off with. It was a simple thing,” Shaw explained.

He added that after the incident, he requested that the boys make a public apology in devotion before the entire school population. He sought to press for stronger action after the request “was flatly rejected”.

He told The Gleaner that he has resumed teaching duties at the St Andrew-based institution, and although death threats and jeering have not ceased, he still has the best interests of the student athletes at heart.

“I have been at school from Monday even though I have been receiving death threats on the streets and from students. I am still fearful and currently seeking advice from my attorney. If I didn’t believe before [that tracks man run the school], I strongly believe that now.”

Despite all that has happened, “I would say, go out and do the best you can. Technically, although they have wronged me, I don’t want to limit the amount of opportunities they have. But they should be careful in the way they treat others. Irrespective of your gifts, always look out for the best for others”.