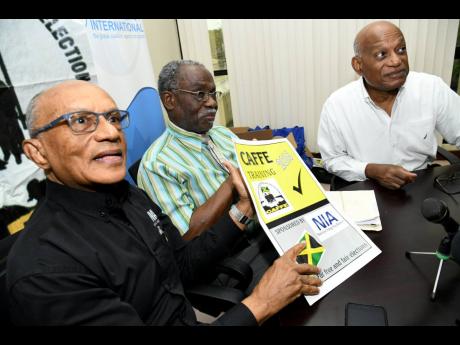 “Jamaica ranks among the best in the world. The most recent Freedom House rankings, which look at electoral systems around the world, score our electoral process 12 out of 12 – maximum points – and that has developed over many years of trial and error of making what is good better and making what’s better best,” NIA Executive Director Professor Trevor Munroe said at a press conference yesterday.

NIA and CAFFE have joined forces to monitor next week’s East Portland by-election, which will see Ann-Marie Vaz of the governing Jamaica Labour Party (JLP) squaring off with Damion Crawford of the opposition People’s National Party (PNP).

In the midst of mudslinging by both camps, claims of vote-buying have surfaced and the matter is of deep concern for both CAFFE and NIA, according to CAFFE Chairman Lloyd Barnett, who lamented the country’s failure to tackle the issue despite the stiff penalties for the offence under the Representation of the People Act.

“I don’t think the problem is so much direct vote-buying by giving somebody money to go and vote for someone. It is the indirect disbursal of money that is really corrupting the system – not only government money – but I should also mention that private or quasi-government institutions may do things which really corrupt the system indirectly. That’s why we need to develop protocol, guidelines on how to avoid these things,” Barnett told journalists.

For Munroe, the fact that he could not recall any successful prosecution for either vote-buying or selling remains an outstanding blot on the impressive record of improvements to date.

“This is an area we believe that more focus [is needed],” he admitted. “Not on only catching small fry, so to speak, but to the extent that there are big fish behind any process of vote-buying, then constituted authorities – Major Organised Crime and Anti-Corruption Agency, the Integrity Commission, the Electoral Commission – need to find a way to ensure that vote-buying or selling is proven, that punishment under the law actually takes place.