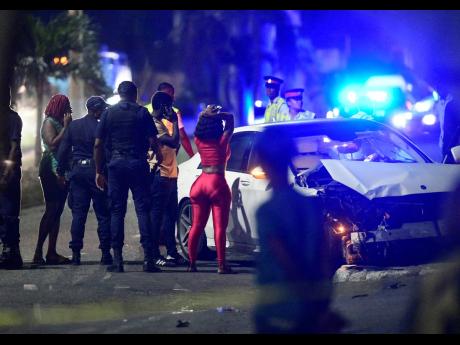 Gladstone Taylor
Police and onlookers at the scene of the shooting on Mountain View Avenue where Alphanso ‘Oney British’ Harriott was killed on Friday night.

A report from the Corporate Communications Unit of the Jamaica Constabulary Force (JCF) said that about 9 p.m., the popular dancehall personality was driving his motor vehicle when men armed with guns rode up on a motorcycle and shot him. The gunmen escaped and Harriott was taken to hospital where he was pronounced dead.

While the investigations continue, acting commanding officer in charge of the St Andrew South Division, Superintendent Aaron Fletcher, told The Sunday Gleaner they are keeping a close watch on the Waltham Park area which he usually occupies, but so far, the community is relatively calm.

“Generally, in the Oakland Crescent, Oakland Road area of St Andrew South, there are no tensions that we are aware of, and we had no reason to be watching the space or looking at it, and his demise came as a surprise. But notwithstanding, we moved quickly to assess what is happening on the ground,” said Fletcher.

Fletcher added that the area is usually patrolled using a joint military-police team, but if the need arises, the level of security coverage will be enhanced.

Speculation has been circulating on social media that Harriott’s murder could be somehow linked to that of Clarke.

Clarke was shot and killed last month by gunmen at a street dance in Kencot, St Andrew. No one has since been arrested for his killing.

“We are unable to say whether there is any connection at this time. Given what we know and the historical nature of the conflict between Cockburn Pen and York Avenue, we still have a joint police-military presence in the space monitoring and trying to prevent any act of reprisal for it,” Fletcher said.

“We know that based on what we have heard, the blame [for Clarke’s death] has been ascribed to their adversaries from the York Avenue space. We have heard that in social media and on the ground. We don’t necessarily concur, we don’t have any evidence to prove that that is so. Notwithstanding, we pay attention and we actively police the space,” said Fletcher.