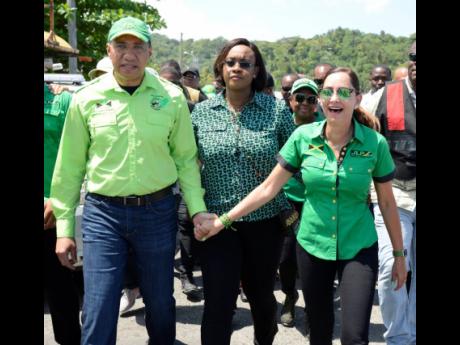 Ian Allen/Photographer
From left: Jamaica Labour Party Leader Andrew Holness and his wife, Juliet, walk with the party’s candidate for the upcoming East Portland by-election, Ann-Marie Vaz, through the town of Port Antonio.

“As I stopped at a bar and I spoke with a few people there, one of them said to me, ‘This tree bend a particular way already, it hard fi mi fi go another way, but yuh si the little shoot a grow up deh so? You go talk to she because she can change ...’ ,” Holness recalled as he addressed Labourites on Saturday while on the campaign trail in the Prospect division of East Portland.

Holness said he suspected that the story has been repeating itself through the constituency.

“A lot of people [have] been voting one way for 30 years straight. Nothing nuh change. The truth is, they not expecting to see anything happen after 30 years, so they not voting for anything. They just voting on tradition,” he said.

But he said the traditional PNP supporters were not forcing their children to vote on traditional lines in the upcoming by-election.

He promised constituents that a vote for the JLP would not lead to disappointment, pointing out that he had already started to fulfil promises he had made while campaigning in South East St Mary in 2017 for a by-election which his party eventually won.

“I make the same commitment to this constituency. You don’t have to worry that you are going to make your vote and it will be the same result. That will not be the case. I give you my commitment that when you make your vote, we will do things in your constituency to [improve] the conditions of life here,” Holness promised, adding that the “people in St Mary will tell you, they are getting better representation now than they were getting under the PNP”.

The JLP’s Ann-Marie Vaz will square off against the PNP’s Damion Crawford come Thursday for the right to represent the constituency in Parliament.