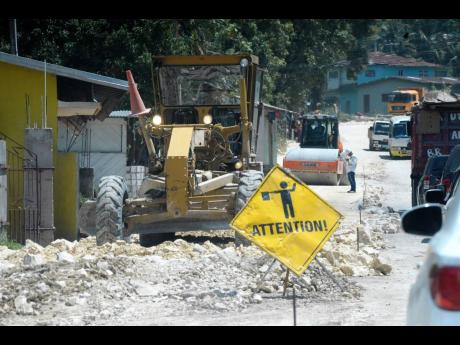 Lionel Rookwood/Photographer
Expansion work in progress on the Ferris to Mackfield main road in Westmoreland.

While welcoming the ongoing road-improvement works in their communities, vendors along the Ferris to Mackfield main road in Westmoreland are concerned that no provision has been made for them to continue earning a living when China Harbour Engineering Company completes the project.

“I have been selling my soup here for over 40 years,” said popular soup vendor Markland ‘Footy’ Ricketts. “I have a whole lot of locals and tourists who have supported me all these years, but the Chinese say I have to move.

“The road will be wider so all of these structures, including mine, will not be here, but I intend to find another location because this is what I do to send all my children to school,” he told The Gleaner.

Forty-nine-year-old farmer Calvin Moncrieff, who also sells ground provision to passers-by along the roadway, is also worried that he could end up struggling to for sales when the project is completed.

“All di bright plans, yet nothing for us. In fact, the bad roads were better for me because the cars drove slowly so you can make a money, but it will not be the same with these cars flying pass, and to make matters worse, we were not considered in the plans,” he charges. “I believe they should have created a place – a kind of rest stop – where we can sell to the motorists.”

Efforts by The Gleaner to contact Dwayne Vaz, member of parliament for Central Westmoreland, where the development is located, were unsuccessful and Ron Daley, the parish manager for the Westmoreland Social Development Commission, requested more time to get more information on the situation.

However, Paulette Dryden Smith, the community development officer for the Whithorn area, told The Gleaner that despite the concerns of the vendors, nothing is in place to facilitate them. She said a meeting is planned for April 17 to discuss the concerns.

“Some have gone to the Chinese, but from all indications, they are on their own, and as far as I know, there is no local representative speaking for them,” she told this newspaper via telephone.

One vendor, Earl Sinclair, who has been offering ground provision and fruits along the roadway in Haddo for over a decade, says the Chinese have given him the assurance that he will be doing better business when the road is completed.

“The road improvement work has not affected me that much, only the dust. And sales are down a bit, but I still have my regular customers, so I still make some money,” he said. “The Chinese say I am going to do better business after the completion of the development, because there will be more tourists and more people passing, so I am preparing myself for that.”