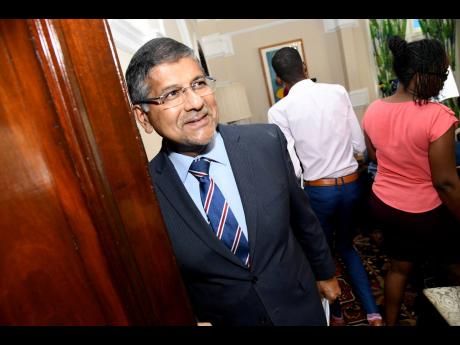 Rudolph Brown
Asif Ahmad, British high commissioner to Jamaica and The Bahamas, attends a press briefing on the Windrush Compensation Scheme announced by the United Kingdom home secretary on Wednesday.

Even though more than 7,000 native or descended Jamaicans may be beneficiaries of a portion of the £200 million Windrush Compensation Scheme, the British high commissioner here has urged against focusing on monetising the trauma of the thousands of people who have suffered from the United Kingdom’s (UK) tough immigration laws. But the Theresa May administration has admitted that the fund could balloon well beyond that projected amount depending on the final number of victims.

Yesterday, thousands who have been disenfranchised from holding British citizenship, many of whom are Jamaicans, bore witness to the establishment of a mechanism by UK Home Secretary Sajid Javid to compensate members of the Windrush Generation who were unable to prove their right to live in the UK.

About 60 Jamaicans were deported or barred from returning to the United Kingdom on the pretext of not being British nationals even though many had been welcomed when post-war Britain, battered and bruised, sought workers to aid in its reconstruction.

The scheme is open to persons from any nationality who have the right to live or work in the UK without any restrictions or are now British citizens and arrived in the UK before December 31, 1988.

“What is unique about this compensation scheme is that it will be based on eligibility, but also, it’s not budget limited in a sense, as the home secretary said, that although he has a ballpark figure of how much the exercise is likely to cost, which is £200 million, it is not a ceiling,” said Asif Ahmad, the high commissioner. “It is simply a calculation that the government has made as to how much it is likely to cost.”

“If it is more than that, then it’s likely what the UK government will provide,” he added while speaking to journalists yesterday.

The scheme is also open to anyone from a Commonwealth country who arrived and settled in the UK before 1973.

“Beyond that, if they are no longer there, then claims can be made as part of their estate. Even if probate has been drafted, people who would have rightfully been direct heirs of somebody deceased, an application can be launched on their behalf,” Ahmad said.

Children and grandchildren of Windrush victims may also be eligible for payouts.

The scheme, which was designed in consultation with those affected and will be subject to independent oversight, is the latest step in the UK government’s commitment to right the wrongs experienced by the Windrush Generation.

Those compensated will also receive personalised letters of apology from the government.

Some 3,600 people have secured their British citizenship since last April when the Home Secretary established the Windrush Task Force.

Approximately 60 per cent of those found to be eligible for compensation are from Jamaica, Ahmad noted. With victims and heirs said to number 12,000, at least 7,200 native or descended Jamaicans might receive payouts.

Dr Desmond Jaddoo, who chairs the Windrush Movement UK, a pressure group that has worked with thousands of victims, said that he welcomes the move and hopes that the procedures and protocols will be stress free and seamless.