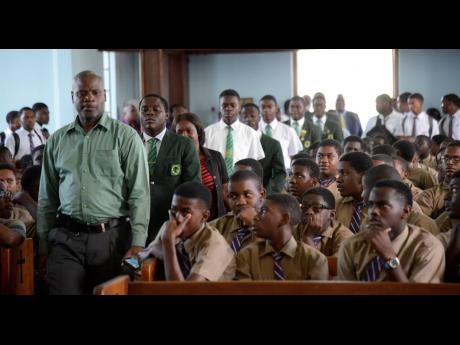 In an attempt to salvage pride following anti-gay chants aimed at Kingston College (KC), which were captured on video, Calabar High head boy Andre McKenzie and seven other students trekked from Red Hills Road to North Street yesterday to officially apologise to their sporting arch-rivals amid public outrage at indiscipline.

The slurs were made two days after KC were crowned champions of the 2019 ISSA-GraceKennedy Boys’ Athletics Championships on Saturday at the National Stadium. Calabar, which had won the Mortimer Geddes trophy seven years on the trot, finished a city block behind the Purples by more than 80 points.

The Calabar boys were accompanied by acting principal Calvin Rowe, inside a packed KC Chapel, to make the address. Calabar’s incumbent principal Albert Corcho, currently on months-long leave, was there to endorse the remorsefulness. Corcho told The Gleaner that he will resume control of the school on May 1.

The development is the second black eye to the all-boys school in the past couple of weeks because of indiscipline. The incident follows the recent revelations of Sanjaye Shaw, a Calabar physics teacher, that he was allegedly assaulted by Christopher Taylor and Dejour Russell, two of the school’s elite track athletes, in December 2018. Shaw accused the administration of failing to suspend the stars expeditiously.

Taylor and Russell, through their lawyer, Christopher Townsend, denied the allegations.

Condemning the video circulating on social media in which hundreds of boys shouted “KC, a b***** school”, McKenzie was gracious in defeat.

“I would like to express congratulations on your recent victory in the athletics championships. I take this opportunity to offer sincerest apologies for the defamatory video in which students of Calabar were doing a shameful chant. We do not condone this kind of behaviour, nor are we in support of the statements uttered.”

He continued: “It is our intention to continue [our] harmonious relationship with Kingston College. The Calabar family wishes your school God’s blessings as you continue to produce men of sterling character.”

Acting principal Rowe, who has come under withering criticism for the rash of disciplinary breaches at the school, sought to assure the public that the administration had advanced its investigations to determine the genesis of the “disgraceful act”.

“Friends, brothers, I apologise for the disrespect. I trust we can find ways to move beyond this quickly,” Rowe, whose substantive position is vice-principal, said.

Dave Myrie, KC’s principal, accepted the apology without condition, insisting that the schools should move forward instead of “wallowing in what has happened”.

He warned his boys, saying: “No amount of anger or anything like that should exist. In case anyone decides to go against that, you know exactly what will happen. Let us go forward in unity.”

Minister of state in the education ministry, Alando Terrelonge, encouraged the boys to never forget that school rivalry should not descend into scurrilous behaviour.

Ronald Thwaites, oppposition spokesman on education and member of parliament of Kingston Central, where KC is located, echoed similar advice to the boys.

“We have to stop dividing ourselves on the basis of race, class, politics, religion, school affiliation, and sexual orientation,” he told the gathering.