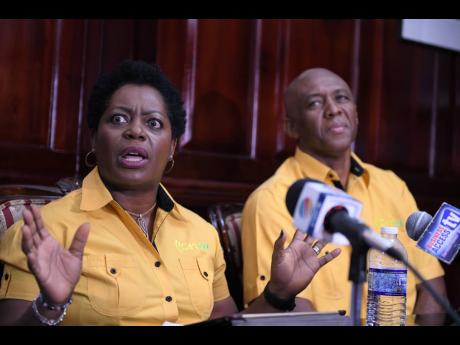 Principals of embattled firm Caricel Jamaica have labelled the Government’s revocation of operations licences as tantamount to a conspiracy aimed at preventing the start-up company from providing direct competition to “incumbent foreign-owned telecommunications companies operating in Jamaica”.

The Court of Appeal refused Caricel’s application for interim relief aimed at protecting the company’s business pending the hearing of an appeal against the Supreme Court’s disallowance of a judicial review of former minister Dr Andrew Wheatley’s decision to annul several of Caricel’s telecommunications licences.

“We represent a direct and powerful competition to the incumbent foreign-owned companies. We offer technology that affords every Jamaican the same access to information and markets irrespective of geographic location and income level,” the firm’s secretary for legal and regulatory affairs, Minett Lawrence, said.

She outlined that Caricel had come under many “attacks”, hinting at a deep-seated plot to engineer its downfall. But Lawrence insisted that the firm would take the matter to the Privy Council. The company is being represented by Anthony, Lord Gifford.

But as the company began rolling out its services, some of Jamaica’s international partners – believed to be the United States, Canada, and Britain – were reportedly adamant that under its then ownership, the company was not fit and proper to operate in the telecommunications sector.

This led to a review of the conditions that led to the granting of the licence, which culminated with the OUR’s recommendation that it should be revoked.

In 2017, then Minister of Science, Energy and Technology Andrew Wheatley told Parliament that Symbiote had not complied with all the conditions that were attached to its domestic mobile spectrum licence, with the issues, including its failure to address the matter of outstanding fees.

Based on recommendations by the Office of Utilities Regulation (OUR), Wheatley initiated the process to revoke the telecommunications licences granted to the company.

Lawrence said that the OUR treated Caricel with little regard for work already done to have a service that would benefit the people of Jamaica.

“Caricel has been the victim of the most blatant and outrageous act of discrimination perpetrated by the Government of Jamaica and other agents of the state since 1962. I am very emotional about this,” she said, as tears welled up in her eyes.

“Our ambition for self-determination, economic independence has seldom been so severely challenged. To appreciate this statement, you need to understand what Caricel represents. We represent the first, the only indigenous, home-grown ownership of a significant technology company,” she added.

Citing proof for her assertions, Lawrence said that it took Caricel three years to acquire licences under a process that was designed to take a maximum 90 days on average.

“We are going to the Privy Council, certainly. We are exhausting all rights of appeal that are available to us, and we are confident that at the end of this process, if not victory, then persons in this country will understand fully what has been happening to this company and what might have happened to other companies in the past who may not have taken it to the extent that we have,” said Chief Executive Lowell Lawrence.

All of Caricel’s licensed facilities and operations have been placed under the immediate control of Xtrinet Limited. Xtrinet is another locally licensed carrier and service provider.