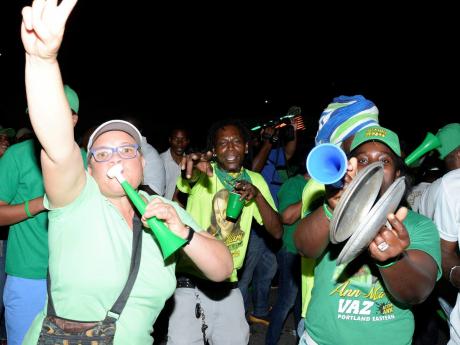 As soon as it became clear that the JLP’s Ann-Marie Vaz had defeated the PNP’s Damion Crawford, hundreds of green-clad Labourites took to the streets dancing, singing, and chanting as throngs of party supporters began descending on the town centre for a victory party.

The excitement started at Boundbrook, close to the counting centre at the Port Antonio High School, which, up to minutes after 6 p.m., had Comrades on one side and Labourites on the other. Both camps danced up a storm as the ballot boxes began to arrive at the counting venue.

However, when the results became clear, there were verbal clashes between the groups as members of the security forces kept a watchful eye to prevent things from getting physical.

“I am going party until sunrise,” commented William Black, a JLP supporter.

“We always a lose, but it’s a new dawn in East Portland as Mrs Vaz has broken a 30-year drought. It was not any easy thing to recover and gain the ascendancy to win by 306 votes. It means then that the people tired a PNP,” he concluded.