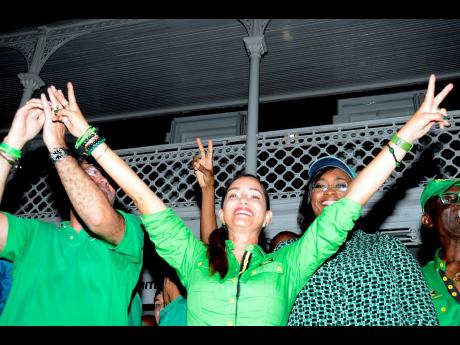 A tremor felt by about 9 p.m. on the streets of Port Antonio marked a tectonic shift in the political landscape of East Portland as Ann-Marie Vaz of the Jamaica Labour Party (JLP) engineered a massive victory in a seat that was held by the People’s National Party (PNP) for three decades.

The self-styled ‘Action Ann’, 53, created history in becoming the first woman member of parliament for the constituency in 75 years of universal adult suffrage.

With Daryl Vaz, her husband, being MP for neighbouring West Portland, the two-seat parish will now be represented by one household.

In the aftermath of the tsunami of green that swept the constituency, Crawford drowned in the sea change, even though he hauled in more votes than any other East Portland PNP standard-bearer in history. Crawford, 38, a former senator and ex-member of parliament, was parachuted into the seat in early March after the February 2 murder of then incumbent Dr Lynvale Bloomfield.

Vaz, a political neophyte, rode a wave of popularity that increased the JLP’s turnout in East Portland by 3,587 votes, a more than 50 per cent surge on the 6,330 ballots polled by the Labourites’ Derron Wood in the 2016 general election won by the PNP’s Dr Lynvale Bloomfield, a two-term member of parliament.

In a late rush, Crawford closed a 6.7 per cent margin projected in an RJRGLEANER-commissioned Don Anderson poll to a mere 1.57 per cent difference.

But the official count, which will begin at 10 a.m. today, and analysis of data across the five electoral divisions – Port Antonio, Prospect, Fellowship, Fairy Hill, and Manchioneal – will give a clearer picture of the anatomy of the canvassing strategy of the Labourites in eroding the PNP’s historical dominance in the seat.

Moments after her seismic political victory was confirmed, Member of Parliament-elect Ann-Marie Vaz directed her constituents to dust off their dreams.

“The days of hopelessness and despair end tonight,” Vaz declared to hundreds of jubilant Jamaica Labour Party (JLP) supporters as they revelled in the parish capital of Port Antonio last night.

“I stand here tonight ready to facilitate every one of your dreams. So take out your dreams and understand that we are going to hold hands and hearts, and we are going to move this constituency from poverty to prosperity,” she said.

After a marathon six weeks of campaigning, slow voting, and playful taunts between rival supporters of the two main political parties, Vaz was declared the winner of the high-stakes by-election.

Last night’s victory set off wild celebrations among the thousands of JLP supporters on the streets of Port Antonio, with the promise of more revelry.

“It is going to be bam bam in Portland,” an exultant Daryl Vaz said.

However, head of the JLP’s public relations commission, Matthew Samuda, struck a more sober tone, noting that while there will be some celebrations, “the work begins now”.

“We want the people of East Portland to know we are not going anywhere. We are going to be here with you,” he said during a television interview moments before the final results were announced.

But the evening belonged to Ann-Marie Vaz, and she basked in the adulation of her supporters.

“I stand here representing every little girl across this constituency who has big dreams,” she insisted.

“I want every little girl, every woman, every man, every boy to understand that when you have a dream, and you believe in that dream, and you take the steps, your dreams will come true,” Vaz continued.