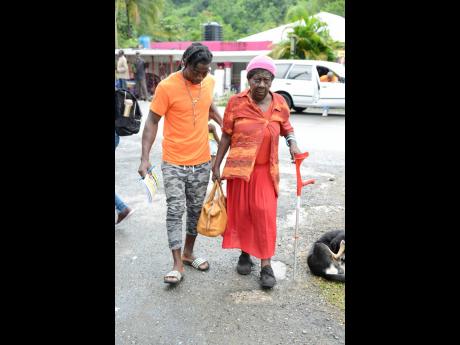 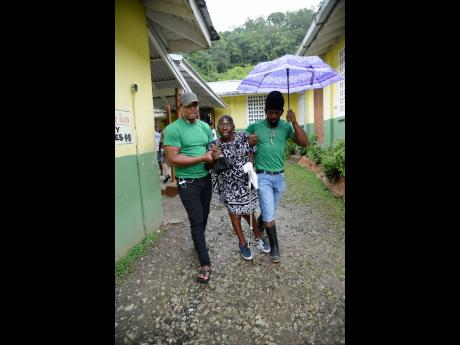 Ian Allen
A Jamaica Labour Party supporter is assisted away from Moore Town Primary School shortly after she voted.
1
2

Constituents in Portland Eastern on Thursday overturned Jamaica’s notorious by-election low turnout tradition by registering in excess of 50 per cent votes, but even more abnormal was the surge between mid-morning and the close of polls.

Approximately 54 per cent of the 36,315 persons eligible to vote on Thursday cast ballots in the by-election which saw the Jamaica Labour Party’s (JLP) Ann-Marie Vaz in line to become the first woman member of parliament in the constituency’s 75 years of universal adult suffrage. The two constituencies in Portland are now represented by the Vaz husband-and-wife team. Daryl is the MP for Portland Western.

Acting Director of Elections Glasspole Brown said the voting performance was “somewhat abnormal” when compared to the turnout in the 2016 general election, both in the constituency and nationally.

“… The voting is somewhat abnormal for a by-election, compared to other by-elections. In fact, the turnout is going to be much higher than what happened in 2016, which was 43 per cent,” said Brown shortly after 5 p.m. when polls closed on Thursday. “At this point in time we are looking at in excess of 50-odd per cent.”

The get-out-the-vote juggernaut of both political parties shows that the eventual 53.7 per cent turnout was consistent with the 53.17 per cent polled in the general election of 2016, but much higher than with the March 5, 2018, by-election in St Andrew North Western, where only 24 per cent of eligible voters cast ballots.

It was also lower than the 39.29 per cent who turned out in the St Mary South Eastern by-election in October 2017.

Brown was intrigued by the surge.

“The morning vote was impacted by the rain in some areas. But during the course of the day, it picked up and flowed steadily, and by 3 p.m., we were close to the national figures in the 2016 general election. I don’t think we have ever seen anything like that. But today’s (Thursday’s) poll was much higher than the national figures and the constituency figures in 2016 … ,” said Brown.

A JLP operative on Friday told The Sunday Gleaner how it has been plotting by-election victories since its general election win in 2016. According to the source, JLP strategists began operating in Portland days after incumbent MP Dr Lynvale Bloomfield was murdered on February 2, 2019.

“We picked out an area in Port Antonio which we believed was representative of the constituency. We went to them, house to house, and asked them, what will it take for them to come out and vote? We did not tell them not to vote. We want them to vote,” explained the source.

“Our job, first and foremost, is to make sure that JLP supporters come out and vote. That is the number one priority. After we heard from them, we then turned to the undecided. We asked some PNP what would make them vote for the JLP. Nobody said money. They said roads, water, jobs. Those were the top three,” explained the operative.

Where transportation was needed to mobilise the vote, the party committed to provide the resources. A large number of Corporate Area route taxis were observed in the constituency making multiple trips to and from polling stations.

“Assistance with personal stuff such as medications, school fees, medical expenses, replacing a door here and there, we do that. Bushing, drain cleaning, and other casual employment opportunities were part of the plan. It’s electioneering. Both parties do it. We make no apologies,” said the operative.

The PNP has complained that it was outspent 10-1 in the constituency. Its candidate created a GoFundMe campaign to raise funds for the contest.

The mobilisation strategy was seen at work during The Sunday Gleaner’s coverage of the entire Fellowship division Thursday.

“More PNP in East Portland than JLP. But road down here marl weh never marl fi years. Marl is not the ideal thing, but at least marl is used to cover the potholes. The PNP down here for years and just take people for granted,” said Marcia, a middle-age woman in the Rio Grande Valley.

“We still PNP, but many like me naah vote. Mi love the young PNP youth Crawford. Him is the best choice, but the practical choice is the ooman (Vaz).”