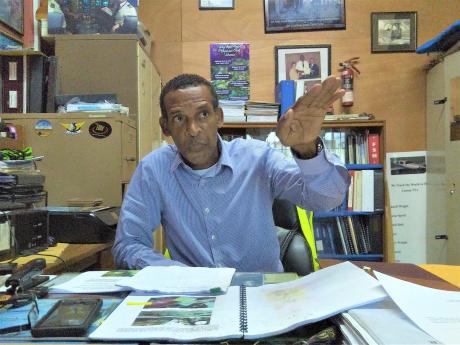 Stewart ... had watched as the plane took off from the Tinson Pen Aerodrome in Kingston and saw trouble as it made an unusual turn, stalled then plummeted.

It’s been a three-way battle for Captain Errol Stewart, the operator of the 18-year-old Caribbean Aviation Training Centre, since the November 10, 2016 crash of his flight-school plane.

He said the pain of the loss of three lives has been a constant burden and now with the release of an adverse report on his flight school, he has been fighting to defend his integrity and at the same time struggling to take his books out of the red with student population dwindling and tuition fees seemingly uncollectible.

To compound the issue, Stewart says the Jamaica Civil Aviation Authority (JCAA) has suspended his license for flight operations pending a re-certification of the training centre and so now, he can only carry out ground school training.

Stewart had watched as the plane took off from the Tinson Pen Aerodrome in Kingston and saw trouble as it made an unusual turn, stalled then plummeted.

He is coming from an average of 60 trainee pilots a year to around 14.

The 14 is seven fewer than the 21 Stewart had more than a week before The Gleaner published the report on the flight-school plane crash.

“Since the report, a number of parents have withdrawn their kids from the school,” said Stewart.

He further said he is completing the re-certification requirements of the JCAA and upon approval, he will conduct air training for the current students and then make a decision whether to remain open.

"For me and the flight school here, if we only have one student coming through, it’s one person we are showing the honesty of a career path in aviation," he said.

The flight-school operator has also sought to respond to complaints by at least one former student that there were management and operational weaknesses at his institution.

In 2016, the student told The Gleaner that he left the flight training centre because the planes were not being serviced as scheduled.

He also said the Cessna that crashed on November 10, 2016 had been having issues before the crash.

But Stewart said, that's not true.

He also said, most of the students who left up to 2016 had run into financial hardships or had migrated, and so could not continue the training programme at his flight school.

Stewart also said he understood why the relatives of the 2016 crash victims would be pursuing legal action against his institution.

"If I was a parent of that child, answers I want," Stewart said. "I am ready to answer the truth."