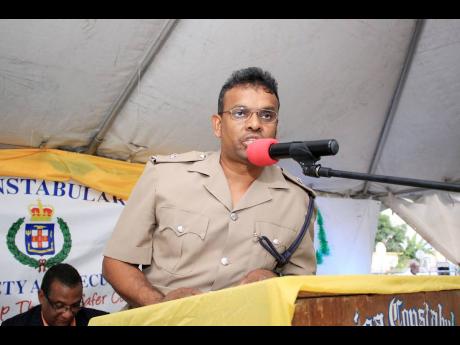 Senior Superintendent of Police Clive Blair is blaming migratory criminals for a 45.8 per cent increase in murders in the St Catherine South Police Division which he leads.

The latest police statistics indicate that the division has recorded 35 murders up to April 6 this year compared to 24 for the corresponding period in 2018.

“The rising trend, especially in murders and shootings, is gang related. There is a migration of criminals into our space, not just from St Catherine North, but other areas like Hunts Bay, Half-Way Tree, Clarendon, and as from far as St Elizabeth and St James.”

He said gangs from his division are responsible for harbouring criminals from outside.

“The migration stems from linkage between gang members in our space who accommodate these persons. In addition, it is caused by operational activities in certain areas where the police go after members of certain gangs. Some of them are captured by us and sent back to the divisions in which they are wanted for serious crimes, in addition to ours that are wanted. We take them in and charge them.”

“Up to the end of March, our arrest rate has increased. We are preparing a number of case files as it relates to serious crimes such as murders, shootings and robberies. We are taking a zero-tolerance approach,” he told The Gleaner yesterday.

Although he didn’t provide figures on adults who had sex with minors, Blair revealed that the division is also seeing an increase in statutory rape. He sought to assure that there would be a clampdown on the offence.

“We are also looking at persons who are wanted for having sex with females under 16,” he said.

“We realise a trend. Whatever resources we have, we are going to work as effectively as possible. You can look forward to an increase in operational activities targeting wanted persons. We will be looking at greater application of the anti-gang legislation,” he said, adding that his team has eyes on gangs in Gregory Park in Portmore, Central Village, Old Harbour Bay and the Old Harbour subdivisions,” Blair said.

He said the police have particular interest in a number of men wanted for murder and is urging them to turn themselves in. They include Manton Brown of Aires Close, Watson Grove, Portmore; 21-year-old Damion Henry, aka ‘Devil’, of Burke Road in Old Harbour; Dane Ellis, aka ‘Bud’, of Succaba Gardens, Old Harbour; and Sanjay Williams, aka ‘Berm’ of Collins Crescent, Central Village.

He said the police are also seeking Marlon Barnett, aka ‘Shortman’, of Golf, Gregory Park, and Jason Duncan, aka ‘Teflon’ and ‘Big Eye’, for shooting incidents.