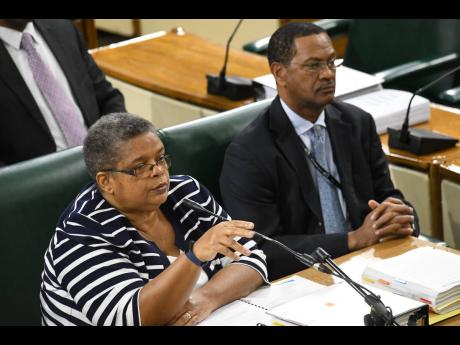 Petrojam, the scandal-scarred state-owned oil refinery, has come clean about the status of its chief financial officer (CFO), Delroy Brown, disclosing yesterday that he was fired, rehired, then sent on ‘garden’, or indefinite, leave.

The Ministry of Science, Energy and Technology, in a document turned over to the PAC at yesterday’s meeting at Gordon House, revealed that Brown was initially suspended for five days “without due process” before his service was terminated in April last year.

“But he was brought back and he is now on garden leave,” Permanent Secretary Carol Palmer revealed.

According to Watson, Brown has been on garden leave for close to six months.

“I think it was November of last year that he went off,” the Petrojam boss told lawmakers.

There was no word on what triggered Brown’s dismissal or when he was rehired.

For months, opposition members of the PAC have been trying to get word on Brown’s status at Petrojam, and news of his dismissal and rehiring left them perplexed.

“Each sitting, we get information that was not correct before,” opposition Member of Parliament (MP) Dr Morais Guy fumed.

Last week, executives at Petrojam confirmed that Brown was sent on leave around April 2017 after he cancelled a $9-million cheque prepared by the company and made payable to a contractor hired by a group – subsequently identified as the McCooks Pen Citizens’ Association – to repair their community centre.

The Auditor General’s Department (AGD), in a performance audit of Petrojam, said Brown cancelled the sponsorship donation on the basis that the cheque could not be made payable to a third party.

It is unclear, also, if that was related to his temporary dismissal or the decision to send him on leave.

However, the report by the AGD said that by the following month, Petrojam received a request for sponsorship of a second community project, this time from a group referred to as ‘Citizens’ Association #2’.

The AGD said that during the audit, it found an email dated July 5, 2017, which was sent to then Petrojam General Manager Floyd Grindley by a PCJ board member, who Pennant identified as Lionel Myrie. The email indicated that the McCooks Pen Citizens’ Association was cancelling its request for the $9-million sponsorship and forwarded a new request from Sydenham Citizens’ Association in the same amount.

Acting CFO at Petrojam, Carlene Evans, confirmed that a cheque for $9 million was made out to the Sydenham Citizens’ Association and later encashed.

Opposition MP Peter Bunting, however, pointed out that a review conducted by the AGD found no evidence that either group was registered with the Department of Co-operatives and Friendly Societies up to October last year.

The $9-million donation is the subject of an investigation by the Major Organised Crime and Anti-Corruption Agency.

Myrie was yesterday summoned to appear before the next sitting of the PAC, scheduled for April 23, to explain his actions.

However, Palmer said that during a meeting on Monday, Myrie clarified that he was not acting as a PCJ director when he forwarded the email on behalf of the two citizens’ groups.

She said Myrie indicated that the “documentation [from the two groups] came to him in his capacity as a personal assistant to the then Minister [of Energy Dr Andrew Wheatley] and he then forwarded it to Petrojam.”

However, government member of the PAC Everald Warmington insisted that Myrie was never Wheatley’s personal assistant.