'He was a serial abuser,' Family of slain correctional officer foresaw death 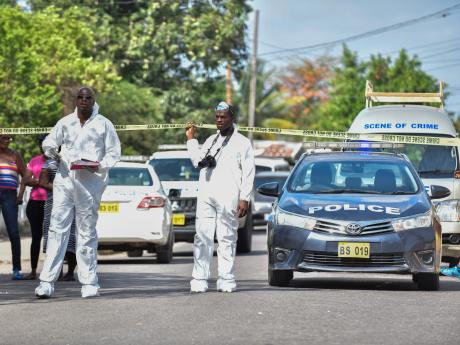 Relatives of Rouleene Clarke Gowans have described her marriage to Patrick Gowans, who shot and killed her this morning before turning his gun on himself, as tempestuous and almost fated to the bloody end that unfolded on Waltham Park Road, St Andrew.

Clarke Gowans was murdered about 7:30 a.m., despite the shouts of the couple’s 12-year-old daughter for her mother to run for her life.

The estranged couple were both correctional officers.

A policeman on the scene who requested anonymity said a 9mm Browning pistol was recovered.

"For years now, she and the man have problems, problems in the sense that him keep on beating her, draw him gun on her," said Horace Copeland, half-brother to Clarke Gowans, who sought to give comfort to grieving family and friends gathered at the house near Woodpecker Avenue, Kingston 11, mid-morning.

Copeland said he had long warned his sister to break off relations with Gowans, who he described as a serial abuser.

He said that he was so incensed that his sister had secretly got married to ​Gowans that he refused to speak with her for a few years.

"Them hide and go married. Me did vex!” said Copeland.

"I don’t go to their house, I don’t deal with her. ‘You a go make the man kill you!’” he said, recounting the multiple warnings he gave Clarke Gowans.

The Gowanses got married about 15 years ago, Clarke Gowans’ father, Melford Clarke, told The Gleaner.

Clarke said he had urged his daughter, affectionately called ‘Donna’, to take refuge at his house and escape years of domestic violence and increasing threats.

Clarke also said several reports were made to the police about Gowans' abuse.

Traffic ground to a halt on Waltham Park Road this morning as onlookers stared in disbelief as both bodies lay side by side on the pavement.

Police cordoned off the intersection of Waltham Park Road, Wavell and Woodpecker avenues, causing havoc during rush hour as commuters headed to work and school.

Motorists were directed to use Rosalie Avenue and other off roads to ease the gridlock.