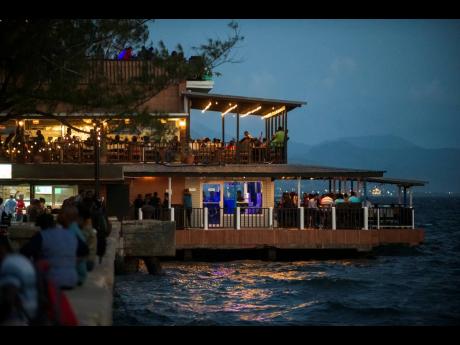 Gladstone Taylor/Multimedia Photo Editor
Scores of patrons enjoying an evening at the Victoria Pier, downtown Kingston, on January 25. The renovated pier houses eateries and entertainment venues and has become a regular spot for parties.

Residents of the Ocean Towers complex in downtown Kingston say they are being inconvenienced as the push to breathe new life into the capital has seen their tranquil nights on the waterfront turn into a nightmarish hell as partygoers regularly descend on Victoria Pier, disturbing the peace into the wee hours of the morning.

“If you are familiar with downtown before some of the establishments, after the workday, it used to turn into a ghost town. There were no cars parked on the waterfront. If you come down there after hours now, it is quite alive, with cars parked everywhere, music playing, and people eating,” a resident told The Gleaner yesterday.

“Depending on who is having a party, they would rent the top floor of the pier complex. A regular party starts off with nice music and then it evolves into some dancehall, with the DJ yelling into the microphone,” the resident complained.

“Weekdays, it cuts off between midnight and 1 o’ clock, but on weekends, that can go up to 5 in the morning, depending on whose party it is. Anybody who has a regular nine to five job, who lives on this side of the building, gets very annoyed.”

The resident, who requested anonymity, also said that the noise nuisance is driving some homeowners out of their properties.

“A lot of the people living in the building are original tenants so they are older people and they are kind of dying off slowly, but this is certainly helping [to kill] them, I think, or they are trying to sell their place.”

A senior citizen, who asked not to be identified, told The Gleaner that while he is aware of the problem being experienced by residents at the south of the building, which faces the party spots, he is not being affected on the northern side where he resides.

A representative from the Ocean Towers strata office told The Gleaner that a resolution can be found if there is dialogue “involving all parties connected to the situation with the view to have the matter resolved or to see how best we can lower the noise nuisance and the lewdness of the lyrics”.

Kingston Mayor Delroy Williams acknowledged that he has been made aware of the grouse and is exploring amicable solutions by the end of the week.

“I’ve received those complaints. I have asked our persons in charge to investigate and report, and that is what we are in the process of doing because it can’t be like that. Persons must be able to enjoy the comfort of their homes. Also, persons must operate within the confines of the law. After our investigations, we will meet with the relevant parties and make some recommendations in terms of what we will accommodate,” the mayor said.

The revitalisation of downtown Kingston, of which the rejuvenated Victoria Pier is a central entertainment attraction, has been much-touted in recent years as city planners work on reimaging the capital city. The mayor, however, said there are no special privileges for businesses and event promoters to ignore the law and be a nuisance to residents.

“I don’t think the businesses on the waterfront have been getting special privilege in terms of lock-off time. If they want to go late, there are certain things they can do with respect to the buildings to contain the sound because the issue is primarily the decibel level of the music,” Williams said.

“The regulations are very clear in terms of the days and the times. We are doing some investigation to see what is happening there and how it is affecting the residents. By the end of this week, we should be able to speak on the way forward,” the mayor told The Gleaner yesterday at the monthly sitting of the Kingston and St Andrew Municipal Corporation.