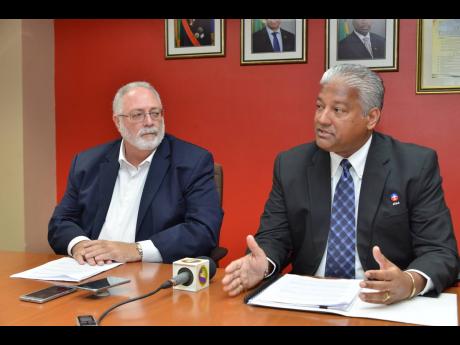 Kenyon Hemans
Nari Williams-Singh (right), director general of the Jamaica Civil Aviation Authority (JCAA), makes a point during a press conference on Thursday. Looking on is Phillip Henriques, chairman of the JCAA.

The Jamaica Civil Aviation Authority (JCAA) has countered claims made by Captain Errol Stewart, operator of the Caribbean Aviation Training Centre, that it was conflicted in the investigation it carried out on the flight school’s ill-fated crash in 2016.

JCAA Chairman Phillip Henriques asserted that the probe was carried out in accordance with international standards and that the investigator in charge was appointed in compliance with the Civil Aviation Act and acted independently of the JCAA.

“It is, therefore, disingenuous to suggest that the JCAA was investigating itself in this matter, given the participation of the aforementioned third parties. The report was not to cast blame, but to point out failures, that in the future something like this will never happen again,” stated Henriques.

Stewart had challenged some of the conclusions cited in the JCAA report on the November 2016 crash in Greenwich Town, Kingston, saying that the findings were based on false information.

The report concluded, among other things, that wrong and malfunctioning parts were fitted to the engine of the ill-fated Cessna aircraft, that there were gaps in the records of the flight school, and that a work order for an engine overhaul had been forged.

Stewart had denied some of the conclusions of the report, adding that the JCAA’s critique lacked objective weight because of its overall responsibility for flight operations in Jamaica.

Henriques, however, pointed out that during the investigations, the investigator required on numerous occasions that the operators (CATC) provide an Authorisation Release Certificate, or a copy of the work order relating to the overhaul of the aircraft engine.

“The documentation was, however, not forthcoming. As such, the investigator, through the NTSB, then sought to procure the work order from the engine-repair facility, which was identified in the engine logbook.

He added that the JCAA had no record and did not receive the rebuttal document in October 2018 as stated by Captain Stewart. Instead, the JCAA received the referenced document on February 19, 2019.

“At the time, the reference document was reviewed by the investigator, and it was determined that the concerns raised by Stewart in the rebuttal document were not material and, therefore, would not give cause to adjust the findings and conclusions of the final accident report,” added Henriques.

Regarding the matter of the ring gear image, Henriques said that the photo appearing in the official report was that of the engine manufacturer Lycoming’s reference starter ring gear and not the actual part taken from the aircraft.

The engine manufacturer, he explained, attached the reference starter ring gear to the engine crankshaft during the investigations to determine measurements and specifications.

From the measurements, it was determined by the engine manufacturer that the engine’s internal timing was incorrect.

According to Nari Williams-Singh, JCAA director general, the organisation has put in place the necessary procedures for carrying out its activities based on a number of recommendations coming out of the report.