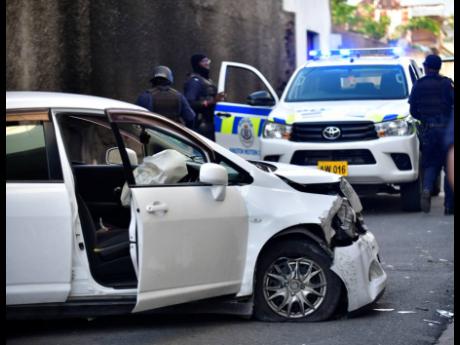 Gladstone Taylor/Multimedia Photo Editor
A police team prepares to leave the scene after a man and a woman believed to be involved in a robbery in Half-Way Tree yesterday were taken into custody after the Nissan Tiida motor car in which they were travelling crashed, following a high-speed chase. The vehicle, which was allegedly utilised as transport in the robbery, crashed into a wall while attempting to evade the lawmen.

Curious onlookers yesterday flocked Love Lane in downtown Kingston after a Nissan Tiida being pursued by cops slammed into a wall.

Acting on a details in a report made by a victim about a robbery in Half-Way Tree, St Andrew, about an hour earlier, a police team decided to stop and search the white Nissan Tiida.

“Some officers saw the vehicle and realised it matched the description, so they attempted to stop the car, but the driver disobeyed,” a police officer, who asked not to be named, said.

The police team gave chase, and the driver lost control of the vehicle and crashed along Love Lane. The occupants, a man and a woman, were held and the vehicle searched.

Numerous items believed to have been stolen, including several high-end phones, were found in the vehicle.

The suspects are believed to have carried out a series of robberies in the Corporate Area.

They were taken to the Kingston Central Police Station.