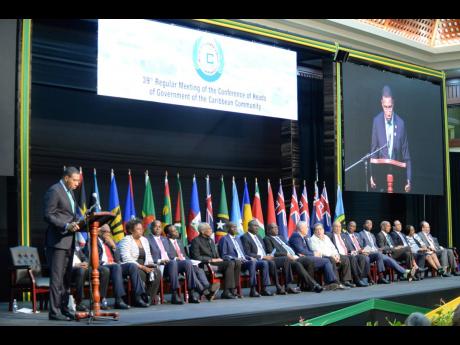 Jamaicans are the main culprits in an emerging illicit scheme of Caribbean nationals submitting fraudulent skills certificate to obtain the right to work in CARICOM countries, an issue likely to inflame anti-free movement passions to the detriment of an already struggling integration movement.

The details are contained in a confidential report obtained by The Sunday Gleaner which continues the decades-long trend of highlighting how the words of CARICOM leaders mean little as the follow-through with implementation remains “poor” and of “great concern”.

Up to 2018, some 168 fraudulent skills certificates were detected or seized in six CARICOM territories, according to the report prepared by the CARICOM Secretariat for the 48th meeting of the Council for Trade and Economic Development (COTED), to be held April 29-30 in Guyana. The report dated April 9, 2019 gives an update on the implementation of the CARICOM Single Market and Economy (CSME).

Jamaicans were holders of the false documents in 167 cases. The other case involved a Guyanese.

The bulk of the fake documents (148) were submitted in Trinidad and Tobago. Antigua and Barbuda, Barbados, Grenada, St Kitts-Nevis, and St Lucia were the other receiving countries.

No arrests were reported, and according to the CARICOM document, “investigations have also not revealed the source country(ies) of the fraudulent certificates”. COTED is due to approve a series of measures aimed at strengthening verification and investigations.

The skills certificate is part of a CARICOM law adopted by the 15-member bloc to allow nationals with certain skills to move freely and work in any of the participating countries without the need for a work permit. Ten categories of workers can benefit under the regime. Agricultural workers and security guards are in line to join.

Artistes, musicians, holders of degrees from recognised tertiary educational institutions, journalists/media workers, and sportsmen and women were the first five before the list was expanded to include nurses, teachers and workers holding specific categories of vocational qualifications.

But like many CARICOM agreements, the skills certificate regime has suffered from a poor record of implementation.

“An assessment of the status of implementation of all 10 categories provided results which are somewhat alarming, as there are only three member states that have covered the first 10 categories in their legislation,” the CARICOM report said, pointing to Grenada, Guyana and Jamaica. Most of the other states cover the first five categories.

Barbados’ excuse is that it has tabled amendments in its Parliament, but with no end in sight for their passage. Dominica, St Vincent and the Grenadines, and Suriname have only added nurses and teachers, refusing to consider the full five additional categories.

The CARICOM Secretariat said some member states have claimed other reasons for their failure to implement. Antigua and Barbuda, Belize, Dominica, St Kitts and Nevis and Suriname have argued that they lack the technical and vocational education and training (TVET) capacity and so cannot certify Caribbean vocational qualifications. Some countries have also claimed they lack capacity to draft the new domestic legislation.

But the CARICOM Secretariat has undercut those arguments, saying significant assistance was provided to member states under the Canada-funded CARICOM Trade and Competitiveness Project and the CARICOM Education for Employment Project.

Trinidad and Tobago, meanwhile, was singled out in another report for maintaining a requirement that CARICOM nationals who have a skills certificate from another CARICOM country must obtain certification from the twin-island republic’s authorities before being permitted to work there. That goes against a decision of CARICOM leaders that states should recognise the skills certificate issued by another state.

Part of Trinidad’s problem is that it only recognises the first five categories of workers and treats nationals skilled in the other five areas as visitors. CARICOM said in January 2019 that it received a complaint that “indicated that a skilled national with a skills certificate issued by St Lucia in the category ‘university graduate’ was made to apply for a skills certificate issued by Trinidad and Tobago. During that period, the skilled national was not allowed to work and was not processed by immigration for indefinite stay”.

Frustrations abound on a wider scale, however, over the pace of implementation of all sorts of agreements, especially those relating to free movement, which Jamaican Prime Minister Andrew Holness, immediate past CARICOM chairman, has argued is one of the areas in which citizens of the region need to feel tangible benefits.

Holness, whose stint as chairman covered the last half of 2018, together with the Barbadian leader, Mia Mottley, pledged a revival of the integration of process. The latest report, though, makes clear that almost a year later, “progress on implementation action to date remains poor, and the credibility of individual member states and of the Community with respect to implementation continues to be at risk”.

But this 2019 report, though acknowledging some advances, says ‘merit’ mention like some states’ removal of visa requirements for Haitians is hardly different in language to one in 2016 that formed the basis for the declaration of a review of the CSME.

With a poor record so far and the final deadline nine months away, the secretariat has been forced into bilateral discussions with member states hoping to give Chairman Dr Timothy Harris, the prime minister of St Kitts-Nevis, some positive news to report at the July conference of regional leaders.