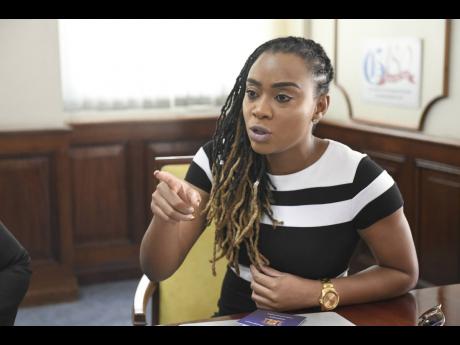 A Gleaner source said that People’s National Party (PNP) “D.K. (Duncan) was not pleased at all” at the call for his daughter, Imani Duncan-Price, to be dumped as chief of staff in the Office of the Leader of the Opposition.

A resolution moved by the PNPYO to have deputy general secretary of the parent party, Luther Buchanan, removed from his post in the secretariat was shut down by Fitz Jackson, chairman of the PNP.

The resolution came out of a 21-point recommendation to the party that was discussed at yesterday’s NEC.

The Krystal Tomlinson-led PNPYO also accused Jackson of being part of the party’s problem, charging that the officer corps of the party does not listen to voices outside of their inner circle.

The party’s youth arm said that those who the party officers listen to are “often conservative, antiquated, and myopic and where alternative views are given, they are shut down and disregarded”.

“Sadly, the chairman and the deputy chairman are the main proponent of this behaviour. If this behaviour is not addressed by the officers [thereby] allowing the structures of the party to function without being hijacked by them and allowing members of the NEC, executive, and other members of the party to share their views, the PNPYO will launch a campaign for the removal of every single officer,” the youth group threatened.

Robinson said that a meeting was scheduled for next week, with the leadership of the party and the youth organisation to meet to discuss their grouses with the party.