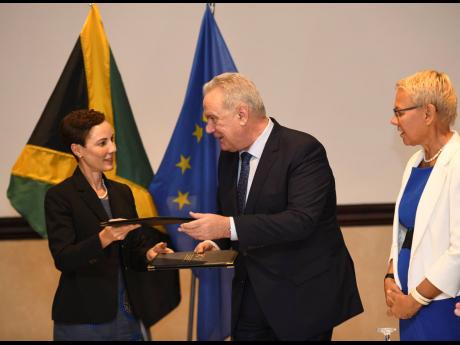 Ricardo Makyn/Chief Photo Editor
From left: Foreign Affairs Minister Kamina Johnson Smith exchanges documents with Nevin Mimica, European commissioner for international cooperation and development, and Malgorzata Wasilewska, head of the European Union Delegation to Jamaica, after a signing ceremony for improved forest management and support for public financial management reform between the Government of Jamaica and the European Union at The Jamaica Pegasus hotel yesterday.

Nervous Caribbean leaders need not worry about dwindling political and developmental support from the European Union (EU) because of possible changes to the make-up of the European Commission, a top EU official has indicated.

Negotiators from Africa, the Caribbean and Pacific (ACP) regions are engaged in talks with the EU to work out a new deal that will replace the Cotonou Agreement, which was signed in 2000 and is set to expire next year.

The agreement provides the framework through which the EU provides grant funding to Jamaica and other countries in the Caribbean for a range of developmental projects in areas such as public-sector reform, regional integration, national security, justice, climate change, and agriculture.

The EU is scheduled to hold parliamentary elections next month, which could mean personnel changes at the European Commission – the arm that deals with development issues – and a shift in financial support to the Caribbean.

Jamaica’s Foreign Affairs and Foreign Trade Minister Kamina Johnson Smith admitted yesterday that she and her counterparts across the Caribbean will be watching closely to see how this unfolds.

“It is something we note and that we are monitoring, because it is important to be aware of developments, and certainly, if there was a wholesale change of perspective, that impacts upon us,” Johnson Smith told The Gleaner after Caribbean negotiators had their first consultation on the post-Cotonou deal with the EU’s chief negotiator, Nevin Mimica, in Kingston.

Johnson Smith indicated, however, that she and her counterparts have a “broad sense” that the relationship between the EU and the Caribbean will remain robust, even if there are changes to the make-up of the European Commission.

“I think it would be naïve of anyone not to be aware of how unpredictable this world has been politically, but certainly, to be fearful [of changes to the make-up of the commission] might overcharacterise the view of the region,” she said.

But EU Director General for International Cooperation and Development Stefano Manservisi sought to allay concerns, insisting that the mandate of the commission would not collapse because of personnel changes.

While acknowledging that the make-up of the commission is important because of personal empathy and feelings, Manservisi pointed out that its mandate is to negotiate the post-Cotonou agreement according to the stated objectives.

“The commission and the whole union is fully committed to the ACP partnership and to strengthen our relations with the Caribbean region, so ... there should be nothing to fear,” he told The Gleaner following yesterday’s consultation, held at The Jamaica Pegasus hotel in New Kingston.

The EU is looking to hammer out a foundation agreement that will be signed by all ACP countries, as well as individual protocols for each region.

Johnson Smith and Manservisi both dismissed suggestions that the EU was “rushing” to have the agreement completed by July.

The EU director general said the ACP nations jointly agreed to try to wrap up the new deal by July.