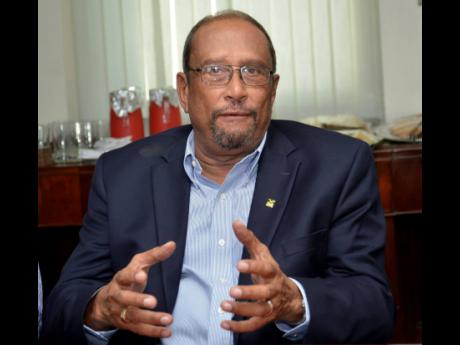 Private Sector Organisation of Jamaica (PSOJ) President Howard Mitchell is calling for the abolition of the current foreign-exchange management programme and for the Jamaican dollar to be pegged to the US currency.

Speaking at the Jamaica International Exhibition (JIE) business breakfast at the S Hotel in Montego Bay yesterday, Mitchell questioned the rationale of operating the foreign exchange management programme in an open economy as Jamaica’s.

“From 1969 when we abandoned the Jamaican pound that was pegged to the UK pound, we have been visiting hellfire and damnation on our poor people, on our fixed-income earners, on our pensioners [and] on our struggling manufacturing sector … all because of some sense of maladjusted pride,” Mitchell, who is also a director of the Jamaica Manufacturers and Exporters Association (JMEA), said while giving the keynote address.

“Devaluation is a curse. It is a self-imposed albatross around our neck and it is time that we face the reality,” he added.

“So from Montego Bay, I am calling for the Jamaican dollar to be pegged to the US currency,” he declared. “We are tired of devaluation. We are tired of a volatile dollar … . We do not have confidence in the management of the exchange rate and our small businesses and our poorer citizens have had enough of this brutal and unnecessary uncertainty and erosion of their finances.”

Describing the foreign-exchange management programme as a fiction, Mitchell argued that small, open economies benefit from having their own currency only if they succeed in anchoring to a reserve currency at an exchange rate that never varies.

“So we need to stop creating uncertainty and wreaking havoc on people’s planning ability, rendering planning a delusion,” he said.

“In fact, today, in the heights of the tourist season, when dollars are flowing, and in spite of BOJ’s intervention, on at least two occasions, maybe three, the dollar is hovering at $132, $133, coming from $125 in a matter of 12 days,” he quipped. “Which small business person do you know can plan to pay back a debt on a particular day and the dollar move six per cent on him?”

The JIE is designed as a global expo, open to local and international companies across all industries, including tourism, construction, business process outsourcing, agriculture and manufacturing, and will be held at the Montego Bay Convention Centre from May 30 to June 1.

At its inaugural staging in 2017, the show attracted more than 600 overseas buyers and suppliers of goods and services. According to Metry Seaga, president of the JMEA, the indication is that this year’s event could be even bigger, with more than 80 exhibitors, and more than 140-plus buyers from the United States, Canada, the United Kingdom and the Caribbean already on board.

Activities over the three days will include an opening ceremony, cocktail reception, workshops and opportunities for one-on-one meetings.