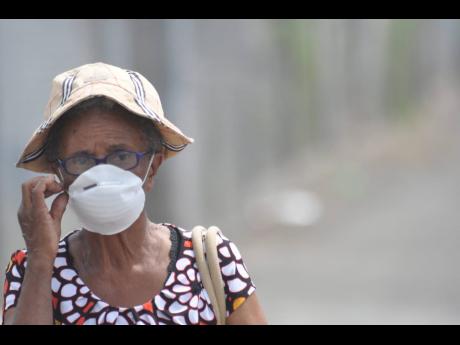 File
A senior citizen covers her nose with a dust mask in Duhaney Park due to smoke caused by a fire at the Riverton City dump on Saturday, March 14, 2015.

Eight residents of Kingston and St Andrew have taken legal action against three government entities for what they claim are breaches of their constitutional rights after they suffered a range of illness related to the March 2015 fire that scorched the Riverton City dump in western St Andrew, spewing smoke and fumes that blanketed the Corporate Area.

Further, the residents are seeking to recover damages from the government entities for negligence, misfeasance in public office, and nuisance.

In court documents obtained by The Gleaner, the National Solid Waste Management Authority (NSWMA), MPM Waste Management Limited (MPM) and the Natural Resources Conservation Authority (NRCA) are said to have breached the residents’ “constitutional right to enjoy a healthy and productive environment free from the threat of injury or damage from environmental abuse and degradation of the ecological heritage and the right to humane treatment”.

The residents claim that smoke and fumes inhaled during the three-week fire, lasting from March 7-29, 2015, caused them to suffer personal injury, loss and damage, with some developing pharyngitis, sinusitis, pneumonia, bronchitis, among other respiratory ailments and nausea.

In respect of the NSWMA, the residents say the company was negligent in keeping or allowing dangerous material to be kept at the Riverton disposal facility without sufficient safeguards to prevent and/or eliminate the dangers attendant on the accumulation of such material.

They also claim that the NSWMA was negligent, as it kept material susceptible to ignition.

Similar claims were made in relation to the MPM Waste Management Limited.

As for the NRCA, the residents claim that the oversight body was aware, or ought to have been aware, of the non-compliance by the NSWMA and MPM with the terms of condition of the permit they were granted, but failed to take any or sufficient steps to enforce compliance.

Also, the residents say the NRCA failed to take pre-emptive or corrective action relative to the NSWMA’s non-compliance with the terms and conditions of the awarded permit.

Besides medical evaluations, the claimants, who are represented by attorney-at-law Jacqueline Samuels-Brown, will draw on the public defender’s report, as well as air-quality studies, as evidence during the hearing.