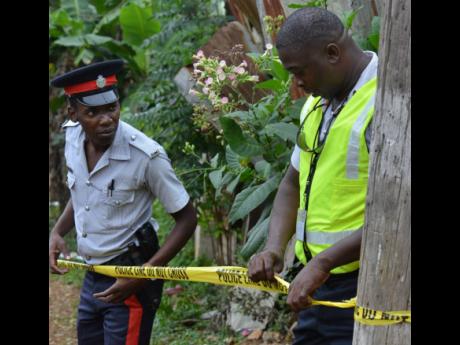 Kenyon Hemans/Photographer
Police officers cordon off the area surrounding the burnt remains of a man who Sterling Castle residents set upon yesterday to exact jungle justice for the murder of eight-year-old Shantae Sykers. 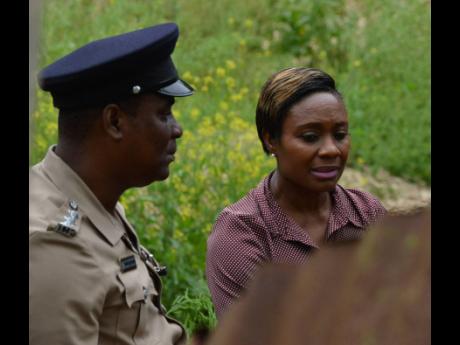 Kenyon Hemans/Photographer
Member Parliament for West Rural St Andrew, Juliet Cuthbert-Flynn, speaking with a police after the residents of Sterling Castle took justice into their hands yesterday and killed a man they suspected to be involved in the death of Shantae Skyers. 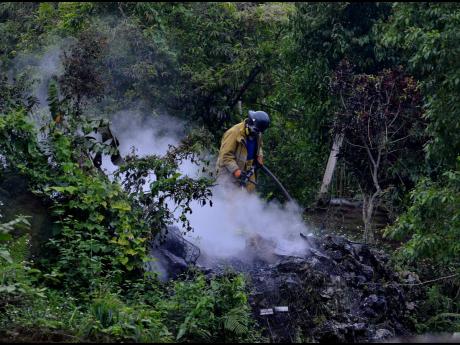 Kenyon Hemans/Photographer
A fireman conducts cooling-down operations in Sterling Castle after residents set the house of a suspected murderer on fire yesterday.
1
2
3

Residents of the usually quiet rural community of Sterling Castle Heights fear that there could be more bloodshed in response to the brutal murder of eight-year-old Shantae Skyers and yesterday’s mob killing of 26-year-old Miguel Williams, who allegedly confessed to the murder.

A five-day search for little Shantae ended tragically on Tuesday when her decomposing body was found among rubble in a section of the West Rural St Andrew community called Blue Hole. Amid anguish, howling, and tears, the grisly killing triggered national outrage, and residents vowed to exact revenge on the suspected killer(s). Yesterday, an enraged horde bludgeoned Williams to death before dooming him to a fiery end in a section of the community called ‘Bulla Level’.

But Williams’ younger brother told The Gleaner that he believes the thirst for blood has not yet been quenched.

“All I can say is, based on all I have been hearing, if this is true, it’s hard not to say he deserved what he got, but at the same time, I am worried for my safety.

“I just don’t want them do anything to my mother,” he said.

A resident near the death scene yesterday also expressed fear that wrath-filled vigilantes could cause the community to descend into another round of slaughter.

“This is troubling on more than one level because even though this man here was killed in relation to the little girl’s murder, his brother, who they believe is also involved, got away. So on the face of things, it nuh done,” a resident, requesting anonymity, told The Gleaner yesterday.

Earlier in the day, the angry mob confronted Williams and his sibling, but while the brother managed to escape, Williams, who was reportedly mentally ill, was beaten then dragged from the one-bedroom dwelling and set on fire. The house was also set ablaze.

One unit from the Half-Way Tree Fire Station responded, but by the time they arrived, all they could do was to cool down the smouldering ashes. They were too late to save him.

Police personnel at the scene were unwilling to give any information about the mob killing, instead referring the media to the force’s communications unit.

A worried-looking Juliet Cuthbert-Flynn, member of parliament for West Rural St Andrew, said that she was terrified that the community could explode again.

“This is what I feared. I feared this,” said Cuthbert-Flynn, who was visiting the community for the second straight day.

“I am lost. I didn’t sleep last night, and if I didn’t, imagine the family of that little girl,” she added.

Urging residents not to yield to force, she said that jungle justice should have no place in society. Cuthbert-Flynn implored the residents to allow the law to take its course.

She called for National Security Minister Dr Horace Chang to consult with Jamaica’s security chiefs to consider ramping up their presence in the hilly community to mitigate further violence.

Skyers was reported missing after she failed to return home from school last Thursday.