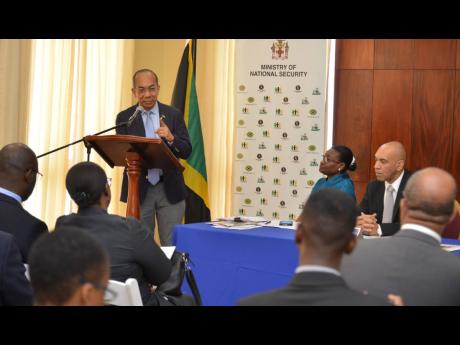 The proposed construction of the Jamaica Constabulary Force (JCF) headquarters is set to save the Government nearly $400 million per year, according to National Security Minister Dr Horace Chang.

“It’s not only a matter of getting teams together as the leadership of the force would like to have, ... , but from a purely financial point of view, we spend some US$3 million per year now on rental. That alone, in fact, can finance the update process. And we will have a property that is purpose-built, and, therefore, serve the purposes of the police force more effectively,” Chang said.

The minister was yesterday responding to questions at the post-sectoral press briefing held at Jamaica House in St Andrew.

In his presentation on Tuesday, Chang announced that the first built-for-purpose police headquarters would be constructed on 40 acres of land in an area of south St Andrew commonly referred to as No Man’s Land, replacing the current headquarters located on Old Hope Road in St Andrew. No Man’s Land is located near Rema, Denham Town, and Tivoli Gardens, which are considered volatile areas.

Also responding to questions, Commissioner of Police Major General Antony Anderson said that the move to an area close to downtown Kingston would help bolster the JCF’s crime-fighting efforts in the area.

“It seems to be that us as police officers need to be – and locate ourselves – where our problems are. [There’s] no point in staying on Old Hope Road and deploying somewhere else to deal with the problem. I think if we situated ourselves in the middle of where the problems are, then we’ll have a better effect,” the police commissioner said.

He is hoping that the increased presence of the police in the area will help in the redevelopment of the area once plagued by gang violence.

“Now, the cumulative effect of having 2,000-plus officers in the middle of six communities that have suffered for a very long time from crime, violence, and just urban blight is significant. It means that if you go down the road there, every second person you meet will be a police officer. Down in the market, there will be police officers. Police officers will be around just going about their normal business,” Anderson said.

He added: “That has a calming and securing and safety effect on surrounding communities and on some of the issues that are happening there. It also brings significant investment to an area that has been somewhat ‘uninvestible’ over a long period of time.”