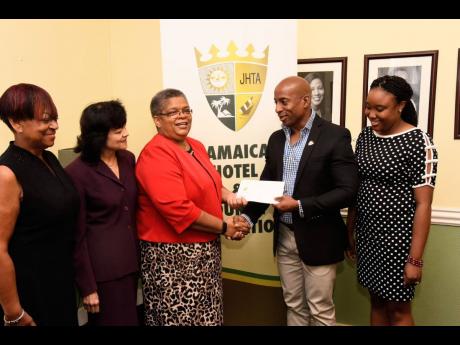 Contributed
Carol Palmer (third left), chairman of the National Task Force Against Trafficking in Persons, receives a cheque for J$500,000 from Omar Robinson, president of the Jamaica Hotel and Tourist Association, on Wednesday. Looking on (from left) are Vanna White, second vice-president of the Jamaica Hotel and Tourist Association; Camille Needham, executive director JHTA; and Chenee Russell, manager of the Trafficking in Persons secretariat.

Public sensitisation should consume the bulk of a $500,000 donation to the National Task Force Against Trafficking in Persons (NATFATIP) by the Jamaica Hotel and Tourist Association (JHTA).

Meanwhile, the JHTA donated another $500,000 towards the operations of the Centre for the Investigation of Sexual Offences and Child Abuse (CISOCA) at a special ceremony at its Ardenne Road Offices in Kingston last week. It was the third annual donation towards the agencies.

“We are doing a lot of work, and a large amount of it is public education, because you know that is half the battle, and I should tell you that we got a guilty verdict earlier this month in the Supreme Court,” said Carol Palmer, head of NATFATIP.

“That case is for sentencing this month. The person pleaded guilty because our law-enforcement officers and our prosecutors are well trained, and well oiled to take the fight to them and catch the perpetrators,” she explained.

“The message is, ‘Be wise, open your eyes, spot them, stop them and report them.' We don’t want our citizens investigating any crimes. If you have a suspicion that something is not right, a little child acting too withdrawn, the difference between parent-child relations to being forced to remain … , we want people to report that to the police,” she said, adding that protecting victims from perpetrators is the main focus.

According to international data, between 20 million and 30 million people are being exposed to human trafficking, also referred to as modern-day slavery. Of that number, more than 800,000 persons are trafficked across state borders.

NATFATIP reported last year that more than 750 anti-trafficking operations were conducted between 2010 and 2018 in Jamaica. From those activities, 82 victims have been rescued, 30 suspected traffickers arrested, and a string of prostitution rings dismantled.

As a result, Jamaica has retained a Tier 2 ranking in the 2018 Human Trafficking Report released by the United States State Department, and NATFATIP looks to improve their ranking in coming years.

In the meantime, Omar Robinson, head of the JHTA, said the association was pleased with the work being done, and its ability to aid in helping Jamaican youths live long, free lives.

CISOCA, in the meantime, has made great strides towards prosecuting many cases islandwide, specifically those involving minors, more than a thousand of whom have been killed under tragic circumstances in recent years.

“It is my great pleasure to just show our support for the two ventures. The JHTA strongly supports ventures like these, and we would just like anybody to come forward and give us information that can help us with the cause,” Robinson added.

“We strongly go against any abuse to children, and ... we want to further the work of CISOCA and NATFATIP, and we want to encourage persons who know of such abuse to come forward,” he continued.

The JHTA president made reference to the heart-wrenching murder of eight-year-old child Shantae Skyers, whose decomposed body was found among rubble in a section of Sterling Castle Heights, St Andrew, on Tuesday.

Two men have been arrested in connection with the macabre killing, the police said. Another was bludgeoned and set ablaze in a mob killing on Wednesday.

"We want to put a stop to the hurting of our children. We need to nurture them,” said Robinson.