Putin envoy in Caracas rejects US revival of Monroe Doctrine 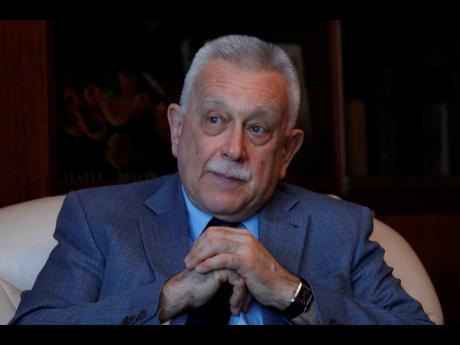 As Venezuela’s reliance on Russia grows amid the country’s unfolding crisis, Vladimir Putin’s point man in Caracas is pushing back on the United States revival of a doctrine used for generations to justify military interventions in the region.

In a rare interview, Russian Ambassador Vladimir Zaemskiy rejected an assertion this week by United States National Security Adviser John Bolton that the 1823 Monroe Doctrine is “alive and well.”

The policy, originally aimed at opposing any European meddling in the hemisphere, was used to justify US military interventions in countries including Cuba, Nicaragua, the Dominican Republic, and Grenada, but had been left for dead by recent US administrations trying to turn the page on a dark past.

“It’s hard to believe that the US administration has invented a time machine that not only allows them to turn back the clock but also the direction of the universe,” the 66-year-old diplomat told The Associated Press this week.

In an example of how the Cold War-like rhetoric on all sides of Venezuela’s crisis has quickly escalated, the ambassador compared hostile comments by Bolton, Secretary of State Mike Pompeo and Republican Senator Marco Rubio to those of the al Qaeda leaders behind the September 11, 2001, terrorist attacks on the United States.

“Their obsession in imposing their will, in this case on Venezuela’s internal affairs, reminds me of the declarations of the leaders of al Qaeda, who in carrying out the attack on the Twin Towers also tried to position themselves as the only bearers of the truth,” said Zaemskiy, who was senior counsellor at Russia’s mission to the United Nations on 9/11. “The history of humanity has shown that none of us are.”

Those specific, written remarks were prepared ahead of the interview.

While the Trump administration led a chorus of some 50 nations that in January recognised opposition leader Juan Guaidó as Venezuela’s rightful leader, Putin has steadfastly stood by Nicolás Maduro, sending plane loads of military personnel and blocking condemnation of his government at the United Nations Security Council.

In a speech this week commemorating the anniversary of the disastrous CIA-organised invasion of Cuba in 1961 by exiles opposed to Fidel Castro’s revolution, Bolton warned Russia against deploying military assets to “prop up” Maduro, considering such actions a violation of the Monroe Doctrine.

What the US considers Russia’s destabilising support for Maduro hit a high point in December when two Russian bombers capable of carrying nuclear weapons touched down in Caracas. Then, last month, dozens of uniformed personnel arrived to service Sukhoi fighter jets and an S-300 missile system.

Zaemskiy said such military cooperation is perfectly legal and has been taking place for years – ever since the US in 2006 banned all arms sales to the South American country. But he said the alliance has taken on added importance as the Trump administration repeatedly insists that a “military option” to remove Maduro remains on the table.

He was unwilling to say how far Russia would go to thwart an eventual US attack, saying that as a diplomat he’s an optimist.

“I firmly believe that in the end reason will prevail and no tragedy will take place,” he said.