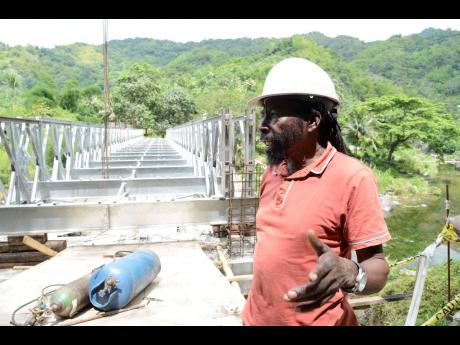 Ian Allen
Derrick ‘Tobi’ Edwards, president of the Chesterfied-Castleton Citizens’ Association, says life for residents in Chesterfield will never be the same when the four-metre-wide bridge under construction is completed. 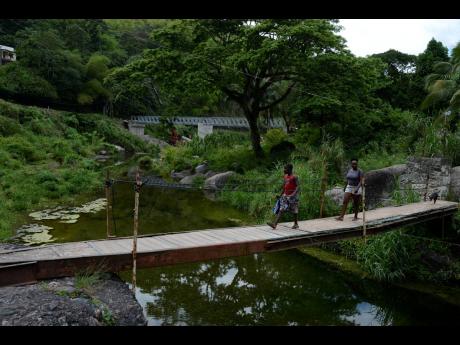 Ian Allen
Residents of Chesterfield district in St Mary walk across a footbridge that takes them across the Wag Water River to the Castleton main road. 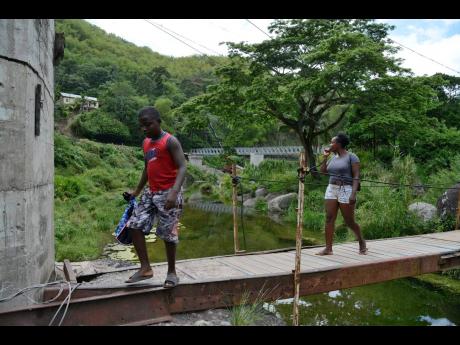 Ian Allen
Residents of Chesterfield district in St Mary walk across a footbridge that takes them across the Wag Water River to the Castleton main road. In the background is the new bridge under construction. 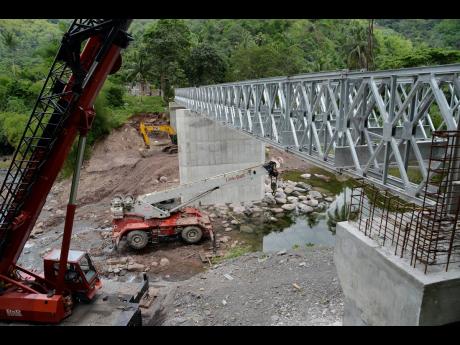 Ian Allen
Heavy equipment lies idle in the Wag Water riverbed across which Prime Minister Andrew Holness walked barefoot in 2017 during the South East St Mary by-election campaign. The new Chesterfield bridge is slated to be completed in weeks.
1
2
3
4

Wednesday night’s spontaneous celebration by residents of Chesterfield, St Mary, at the bridge that will provide vehicular access to the rural community was a measure of the heightened expectation, with the structure projected to be completed in June.

The bridge will give residents respite from the ravages of the Wag Water River, which separates Chesterfield from Castleton, during the annual Atlantic hurricane season that runs from June 1-November 30.

Cut off from the Castleton main road, the plight of Chesterfield residents made headlines at home and abroad in October 2017 when still photos and videos of a barefooted Prime Minister Andrew Holness, with pants rolled up, walking across the riverbed into the community were transmitted.

“We excellent man, even if no vehicle no drive pon it, we still good, because a years we a suffer without a bridge,” president of the Chesterfied-Castleton Citizens’ Association, Derrick ‘Tobi’ Edwards, told The Sunday Gleaner on Thursday.

Edwards believes that the bridge is testament to community perseverance and political will to alleviate the suffering of the estimated 500 residents who have for decades been cut off, to some extent, from the rest of Jamaica.

April 23 will mark 19 years since residents first made an official request for a bridge, and by 2011, it seemed that things were on track to fall into place.

“In November 2011, we write to JSIF (Jamaica Social Investment Fund), and December we get back answer that we shortlisted for the 2012-13 financial year, but them never have nuh money,” Edwards recalled.

“So we write to the Ministry of Works, we write to NWA, and we write to JSIF asking them to merge (their efforts) and see what they can do, but it seemed like the time never come.”

The Chesterfield bridge is now 80 per cent constructed, with completion of the 12-tonne structure that can accommodate single-lane vehicular traffic projected for the end of May.

Shaw explained that the four-metre-wide compact modular bridge consists of 18 bays spanning 57 metres across the Wag Water River, with side panels about 1.3 metres high and the underside of which is set about six or seven metres above water.

A narrow makeshift bridge for pedestrian access was established after the prime minister’s visit.

The works are valued at J$58 million and is one of 66 projects being implemented under the J$5.83-billion local component of the Major Infrastructure Development Programme.

Edwards is convinced that the prime minister’s 2017 visit helped to highlight residents’ ordeal in getting to and from school and work, something most people take for granted. The community is also marooned whenever the Wag Water River is in spate.

“Is one of the thing weh you have to endure, too, because a lot of times when the rain a fall, we have to go to Two Spring and wait until the children come fi cross them, because books wash weh, school bag wash weh, but luckily, none a dem drown,” Edwards added.

For the 68-year old, who was born in Chesterfield, the bridge represents a monumental achievement to community activism and political power.

“When the prime minister come dat time, the paperwork done already; it was 90 per cent prepared and him grant us the money, and is so we kinda get the bridge. Me a tell you the truth, it spark a fire. This is a history create inna South Eastern St Mary,” the community figure said, thanking Dr Norman Dunn, who emerged victor in the October 2017 South East St Mary by-election, and for whose candidacy Holness did his river-crossing journey.

The displacement crisis was best illustrated by a young man who explained that furniture delivery trucks have to meet them at a designated area on the Castleton main road where it is offloaded, much to the chagrin of motorists who sometimes have stop in order to avoid hitting the movers doing the heavy lifting. Then there was the hard work of getting the furniture via a beaten track down to the riverbed. After resting, the movers would then have to chart a path across the river, before the trek uphill.

This dependence on others to get bulky items safely across, including supplies for the grocery shop which must be transported atop heads or across shoulders, has led to a camaraderie born out of mutual need. Even residents with vehicles are subject to this unique community support system but have the added burden of depending on others to secure their cars since there is no access road into Chesterfield.

“You have to find somebody with whole heap of yard space and ask them fi make you keep it (the car) inna them yard. Because you can’t park pon the road, so sometimes you have fi go all half-mile down the road fi find a good spot,” the youngster told The Sunday Gleaner.

“And even if you walk foot, you still have problem, because when you come from work and have on shoes whole day and come fi cross the river, you foot hot because it cover up whole day, then you take it outa the hot shoes and walk inna the cold river when you reach. So more time you get sick because of that.”