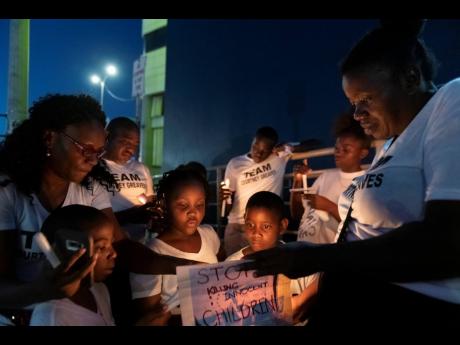 Gladstone Taylor
Tanya Louden (left) and her daughter Courtney Greaves (fourth left) with invited friends and colleagues at a public stand against violence perpetrated against innocent children amid recent tragedies such as the killing of eight-year-old Shantae Skyers of Sterling Castle, St Andrew. The gathering took place in Half-Way Tree on Good Friday about 7 p.m. The protest involved a candlelight ceremony, prayers and the singing of hymns.

When eight-year-old Courtney Greaves heard about the gruesome murder of Shantae Skyers and other children harmed in recent times, she begged her mother to help her and friends prepare a candlelight vigil in their memory.

Greaves and her mother, Tanya Louden, took to the streets of Half-Way Tree, St Andrew, last Friday night, raising placards and shouting for a halt to the killings, rape and mistreatment of children across the island. The march ended with a candlelight vigil in Half-Way Tree square.

The student of Jessie Ripoll Primary School and member of the Holy Trinity Cathedral in Kingston was joined by her classmates as well as adult bystanders incensed by the killing of Jamaica’s most vulnerable.

Voice for the voiceless

Greaves said she hopes to become a prime minister of Jamaica, a preacher or a police officer, and said her efforts were aimed at honouring children like herself.

“I wanted to remember them, and I want to be a voice for the voiceless. When I heard about the children who were hurt, I felt sad and I wanted to help them,” she told The Gleaner.

Louden said her daughter suggested the vigil only Thursday night and that it warmed her heart to help her daughter prepare.

Some of the posters read: ‘We are innocent children’, ‘We want to grow up’ and ‘Our lives matter’.

“I am proud of what she is doing. I am scared also as a mother, knowing what is happening to the children out there; and when she came up with the idea, I was just very willing to support and stand with her,” said the proud mother.

“She wants to stand with every child and she always tells me that she wants to be the voice of the voiceless. I guess that was the initiative for her to do these things,” Louden said.

She was reported missing to the police after she failed to return home from school.