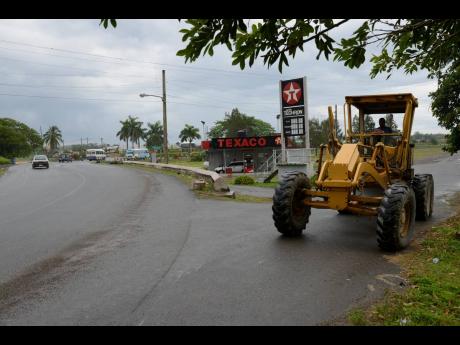 The Texaco service station at the Robert Schumann Roundabout in Agualta Vale, St Mary, has been a landmark at that location for many years, despite the different owners and brands under which it has operated. With the start of the third segment of the North Coast Highway Improvement Project linking Ocho Rios in St Ann and Port Antonio in Portland, the station began to undergo a radical transformation which has resulted in a change of fortunes.

Upon completion of the rehabilitation of the Junction main road linking St Mary to St Andrew, the short-term windfall it now enjoys from the construction work will evaporate, unless management is prepared to make major investment, owner Howard Paulwell told The Gleaner.

This is because the main roadway from St Andrew that now passes right beside the station will be rerouted directly to the roundabout, effectively taking it out of the line of sight of the motoring public.

“As it is right now, the road configuration actually puts us down under [the roadway] and because of the new road situation, the station is going to be discarded. So right where the road is going to come into the roundabout, we will have to build an entrance, a sort of slip road, coming into the gas station,” Paulwell told The Gleaner.

And then if you’re coming from Annotto Bay (opposite direction), you can just slip and come into the gas station. That’s the best thing I think that can be done,” he told The Gleaner.

For supervisor Lavern Haase, the longer the road construction in that section of the highway lasts, it is the better for business. During a visit last Wednesday, she explained that the influx of heavy-duty equipment which uses diesel for fuel, has resulted in an uptick in sales of that commodity.

“Basically, we have not lost business as yet, because we are selling more gas oil (diesel) than normally and snacks and also the gasolene has increased a bit, but we are waiting to see what will happen after the road has changed course and the construction crews move further in the Junction,” she said.

Management has recognised the need for extra promotion and is working to bring the station back into focus, once the road rehabilitation is completed, Paulwell explained.